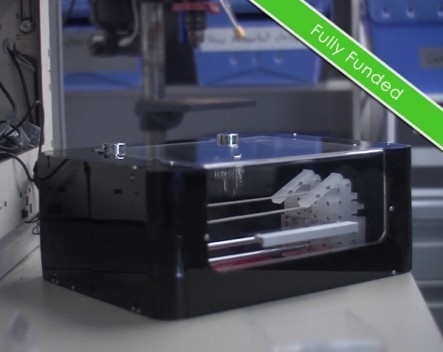 The startup, an ilab alumnus, has developed a 3D printer which is able to print circuit boards. Last year it raised $137,356 on Kickstarter, after setting an original goal of $30,000.

In January, Cartesian Co left Brisbane to head to New York to take part in the three month Techstars program. Cartesian Co received $US118,000 in funding in exchange for between 7 and 10% equity.

Speaking to StartupSmart from New York, co-founder Ariel Brinner says as much as they would have loved to have stayed in Australia, it’s just not practical.

“All of the trade shows we need to be at, all of the investors we need to meet. And most of our customers are here,” he says.

“Even when we were in Australia, 60 or more per cent of our customers were in the US. So it was inevitable. We decided that East Coast was the way to go because we wanted to tap into the maker bot network.

Cartesian Co’s Argentum printer is able to quickly make prototype circuit boards. However, where Brinner says it has real potential is its ability to print paper and fabric circuits.

“So fabric is somewhat experimental at the moment still. But it is by far the most exciting,” Brinner says.

“But what makes us excited is the idea of being able to make fabric circuits. Because then, if you can actually print circuits on fabric, which we can, you can mount components to the fabric, another thing we can do; then you can make truly wearable tech for the first time.”

Brinner says that could mean anything from iPods in t-shirts to touch interfaces on jacket sleeves.

“The reason we haven’t seen it, is because no one has been able to prototype it,” Brinner says.

“Now with our printer, we are on the cusp of being able to print that. You can begin to print things like that.”

The startup is raising a seed round, which it hopes to close in the coming months.