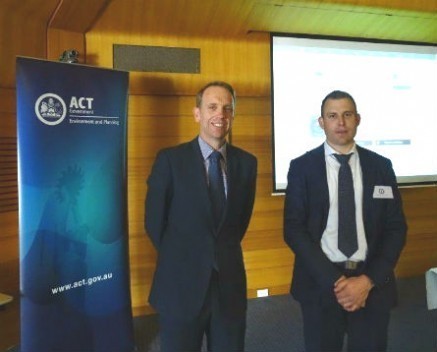 An avid bushwalker’s conservation mapping startup has helped to nearly double the ACT’s rare plant records, with a new app now allowing the platform to expand across Australia.

The Canberra Nature Map is the brainchild of software designer Aaron Clausen. The website and app allows users to upload a photo and location of something in nature and have it identified and analysed by experts.

The service is now being used by the ACT government and environment authorities in planning, development and land management decisions.

After the success of his first experiment, Clausen will soon be launching NatureMapr, a software-as-a-service cloud platform that utilises the technology for crowd-sourced conservational mapping and recording.

He came up with the idea after nearly trampling one of the most endangered plants in Canberra while mountain biking in 2013. He was mesmerised by the plant and showed a photo of it to a government department worker, who told him it was the very rare Canberra Spider Orchid.

“That really sparked an interest, a natural curiosity. I’ve always been someone who liked nature but I had no idea this sort of thing existed.”

Following that experience, Clausen was inspired to take photos of all the interesting plants he encountered on his adventures, and began to map out the locations through the GPS on his smartphone.

After amassing too much data for his phone to handle, Clausen took advantage of the Christmas holidays to develop a prototype platform to collate this information and create a conservation map of the ACT.

This is now having a significant real world impact in Canberra, Clausen says, with the site also helping to identify weeds.

“There are really good examples where the data comes through, the park rangers receive a report, and then they’re out there the next day with pesticide destroying a dangerous weed,” he says.

“It’s pretty awesome to see the end-to-end thing and that the government is acting on the data they receive. There are real on-the-ground outcomes.”

So far the platform has enabled 180 users to lodge more than 8000 photos and plant records.

About 40-50% of the ACT government’s rare plant records have come after Canberra Nature Walk launched last year. It has also identified species that hadn’t been seen for 60 years and forced the re-route of a gas pipeline after spotting a sensitive plant colony being in its way.

“I can’t believe it, this is why I built the app,” Clausen says.

“I’m pretty passionate about wildlife, I always go bushwalking, and now I love taking the app and going around taking pics of anything I find.”

Expansions to Australia and the rest of the world

With increasing demand from outside the ACT, Clausen decided to create an app that can be used around Australia.

“The technology inside of Canberra Nature Map is brilliant, so I want to open that up in a dedicated app,” he says.

The NatureMapr app will be launching in the coming months.

“Anyone can run around with the app and starting collecting photos of plants and animals,” Clausen says. “It then gets analysed and verified, and you get a really good picture of the distribution of the species.”

The startup has been bootstrapped by Clausen, but the ACT government recently became his first paying customer, and they’ll also be raising funds for enhancements and added features.

“They’re chuffed, it’s really surprised me,” Clausen says. “This was a hobby, and they’ve been blown away by the ease and the convenience, as well as the power of the data.”

The app will be free for the general public, while agencies and authorities will be charged a fee for the service.

With the impending expansion to the rest of Australia, Clausen also hopes the startup can reach further to the likes of Singapore and New Zealand.

“There’s nothing in the technology that’s unique to Australia,” he says. “It doesn’t have those limits.”