CryptoPhoto hopes to cash in on COIN prize 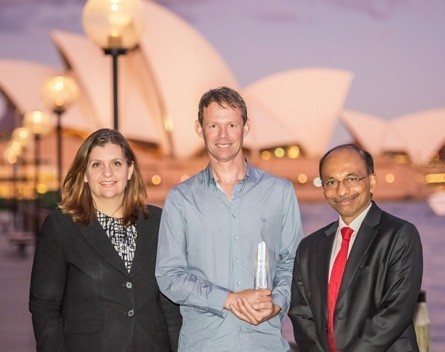 Queensland-based online security startup CryptoPhoto has received an exclusive place in the TCS Co-Innovation Network (COIN) after being selected from six other tech solution companies at a forum in Sydney last week.

Using the service, a photo is display on a website, and the user then selects that picture from a grid on an iPhone app or paper card.

The startup will now have access to the TCS global innovation ecosystem, including international VC funds, leading startups, academic institutions and mentors.

CryptoPhoto CEO and co-founder Chris Drake, who pitched at the forum last week, says this prize will have real-world consequences.

“We’ve won a couple of awards before, but this one is different,” Drake says.

“It comes with an endorsement from a big company that’s going to do something with it. It’s not just a pretty thing to sit on a shelf; I can see a place where it can lead to money.”

As part of the prize, CryptoPhoto will receive membership into the COIN program, a fully-paid trip to Silicon Valley along with commercialisation and strategic management advice.

The competition was open to startups in Australia and New Zealand focusing on solving high-value business challenges.

Drake hopes the award will help solve the main challenge CryptoPhoto has faced since launch.

“The problem we’ve been having is trying to get people to understand they need to use it,” he says.

“There’s some sort of weird paralysis going on in the security industry, they’re stuck in a loop of getting the crap hacked out of them and then not understanding that there is a way to fix it.”

He’s spoken to “over 150 big companies” that have understood they need the product, only to have those conversations peter out.

“We’re a small startup, so that’s a difficult and risky thing, and because we’re doing security it makes it twice as hard,” Drake says.

“Being a security startup is just a nightmare basically.

“We’re hoping the TSC involvement is going to give us access to a 300,000 plus strong company network, with an enormous reputation out the front.

“They’ll be the people the customer sees and we’ll be offering our technology.

“It takes out the whole small startup rubbish from the equation so people can look objectively at the fact we solve a massive problem.”