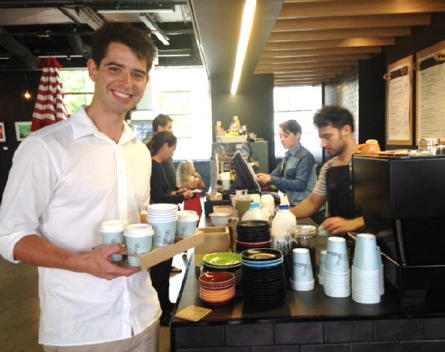 Tech-savvy foodies descended on Sydney this weekend for a two-day hackathon dedicated to all things edible, with an app described as the food baby of Uber and Tinder taking the top prize.

The winning pitch, an app called Chewsr, proposes taking high quality photos of restaurant food which users could then swipe through, like they might do with potential suitors on dating apps.

Sam Polgar, who was one of seven people on the Chewsr team, says it’s all about “finding food by feeling”.

“Food is emotive. We constantly ask ourselves, ‘What do we feel like?’ Reading a menu doesn’t do it justice,” Polgar tells StartupSmart.

Polgar has worked in kitchens since he was a teenager and says food’s visual appeal cannot be underestimated.

“People eat with their eyes first,” he says.

He also says consumers are creatures of habit and can be overwhelmed by the amount of choice available.

“There are so many decisions to make that we get stuck making the same decisions,” Polgar says.

“When it comes to takeaway, we end up having pad thai and pizza again.”

Hackathon mentor Anne-Marie Elias says she was most impressed by the participants’ agility.

“People came in with a clear idea, but when they tested them with peers and market, they were willing to be agile,” Elias says.

“That’s how you keep a business moving and ahead of the game.”

She says Chewsr has a clear value proposition – improving upon pre-existing food apps like Menulog by cutting down the amount of reading the user has to do.

The Chewsr team is confident the public will agree after successfully trialling their app during the hackathon.

“We found there was a need for caffeine after a couple of days of hard work. We put up lots of pictures of coffee and tea, then took the payments,” Polgar says.

They took over $300 worth of orders from the participants alone.

HackFood comes at a time when the food tech industry is burgeoning. Liz Kaelin, who founded Food Tech Australia with MasterChef alum Kevin Perry, says food is the world’s biggest market, and their organisation is committed to growing startups in Australia.

“We feel like it’s time for people to sit up and take notice of the food tech industry because within the next 12 months I guarantee you that it’s going to be a very different landscape,” Ms Kaelin told AAP last week.

It’s a landscape Polgar and his team want to join.

“We’re definitely going ahead with it … I’ve had a couple of discussions with some venture capitalists,” says Polger.

“But it’s a game of speed and work ethic. When we put [our plans] into action, it’s got to be quick and good.”