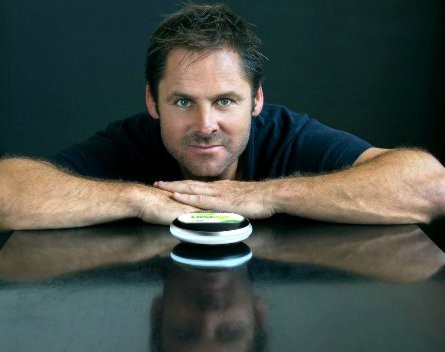 It was while watching a cricket Test match at the Sydney Cricket Ground that actor and former events director Sean Brandtman came up with an idea for a portable battery charger for mobile phones.

The battery on his phone was low but he didn’t want to leave it somewhere charging out of sight or give up his seat and miss the game to stay with it.

With people increasingly unwilling to be separated from their phones as they become essential tools for work and play, Brandtman tells StartupSmart he saw an unmet demand for a battery charging device people could have close to hand.

“People are reluctant to leave their phones behind the bar or next to a wall, so I started drawing an idea on the back of a coaster,” he says.

The next week he began pursuing his idea by consulting with industrial and technical designers, including an acquaintance who used to work for poker machine maker Aristocrat Leisure.

That was two-and-a-half years ago.

His idea has now become a reality with Discgo Charger officially launched this month with Sydney’s Keystone Group of bars the first to take up the device. An app that locates the nearest Discgo Charger is to be launched next month.

Brandtman says he raised $1 million to develop the charger, with three major investors coming on board.

He says getting the technology right, and particularly the “look”, were important.

“The end user likes to use something sleek,” he says, adding there was further development to come to make the device more streamlined.

He advises others seeking to develop an idea to not go it alone.

“You need to have smart people around you, driven people, people that are passionate about the project. My whole team does that.”

Brandtman, who used to run corporate events and has appeared in television series Home and Away, adds that entrepreneurs need to be prepared to pay for expertise to take their ideas further.

While battery charging stations for mobile phones are not new, Brandtman doesn’t see his device having a competitor.

“Charging stations aren’t a solution. You have to stand watching it (your phone) like a hawk.”

He says that, from his research, people want to be able to re-charge their phone through a device they can have in front of them.

“I think we’ve developed the charging system to a more convenient form.”

He says Discgo Charger has attracted interest from far afield, including around Australia, the United Kingdom, United States and Brazil.

“The goal is in two years’ time I want Discgo Charger to be known as the most common form of charging for anybody that’s out and about socialising. It’s the most convenient solution to charging.”