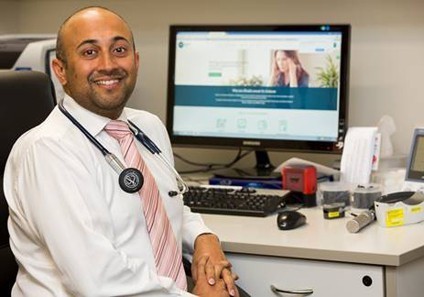 Dr Sachin Patel doesn’t want you coming to his office for a medical certificate.

He wants you to Skype him instead.

The Melbourne-based GP is launching Dr Sicknote, a startup that allows patients with minor illnesses to see a doctor via webcam to get a sick note rather than travelling to a clinic.

He says the initiative is designed to reduce pressures on doctors and Medicare, with requests for certificates costing the health system as much as $100 million every year.

He also says it’s in the patients’ best interests not to get out of bed.

“The last thing you want to do is leave your house,” he says.

“You know when you go to the doctor they’ll say, ‘please rest’.

“But because your employer wants a certificate you have to take time out of your recovery.”

As an employer himself, Patel understands why workplaces concerned about their employees taking “sickies” might be sceptical about Dr Sicknote.

But Patel says the most common complaints – diarrhoea, migraines and colds – are all taken on face value when meeting a doctor in person and his online service would be no different.

He also says most people are not trying to weasel out of work.

“The vast majority are not trying to do anything funny, they’re just trying to get themselves better and continue going their daily lives,” he said.

In fact, he said his company will promote the importance of employment to its customers, and educate bosses about ways to engage employees who might be absent more often than they’d prefer.

On occasions when Patel’s staff don’t think a certificate is warranted, Dr Sicknote can refuse to issue one and reimburse users the $19.99 consultation fee.

Employers can even contact the company if they want to check the authenticity of the certificate, and when someone plans on being absent from work longer than two days, Dr Sicknote won’t issue documentation; they will then need to see a GP in person.

Dr Sicknote is Patel’s second foray into the world of health tech this year after starting Aged Care GP, a mobile doctor service for people living in aged care facilities.

It’s another attempt by Patel to ease the burden placed on health care providers and he says it will free up doctors to use their time on sicker patients.