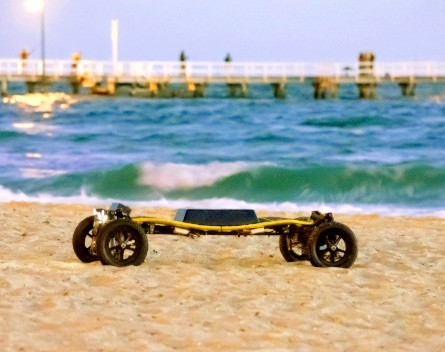 Snowboarders no longer need to head to the snowfields to get their fix.

BajaBoard, described by its creators as “the formula one of skateboards”, allows boarders to “carve up” grassy hills.

Co-founder George Li says he and fellow co-founder James Murphy have long tried to work out a way to board or skate the large hilly park next to where they live in Lysterfield, Victoria.

So they designed BajaBoard, an electric skateboard that can be driven off road, travels up to 50 km/h, and is controlled by its rider via a handheld wireless controller.

On Tuesday it was named the winner of the Australian Sports Technology Network’s pitching competition.

“We’ve always wanted a method to carve up this park, and not just carve it up, but to be able to do the jumps and drops that you can expect as a snowboarder,” Li says.

Li is aware that the BajaBoard has competitors; it’s not the only electric skateboard on the market. But he says it differs from other products because it’s far more at home off road. He compares it to the differences between a BMX and a mountain bike. The BajaBoard comes with suspension systems, traction control and “a whole variety of unique features”.

“The real reason we decided to start this business, wasn’t because of money or any of that,” Li says.

“We always had the idea of doing this, just for our own hobby. But when we went around riding Lysterfield (Victoria), around on parks, there were two comments that people always came up to us with.

“Number one was holy shit. And number two was can you make one for me.”

The startup launched its website about a month ago and had a batch of 50 boards for presale as beta field trial test units, and those have sold out. The beta models are set to be released in April and the startup is currently selling another batch of boards set to go out in June. The boards are currently priced at around $4000 including shipping.

“The business model is reasonably straightforward, we sell the boards, and as with every good automotive business we sell small parts with it, which is going to be a larger more profitable section of the business,” Li says.

The BajaBoard team is now seeking $300,000 to help get them to the first field trial phase in April and to fund a launch in Europe and the United States, where most of its beta units have been sold.