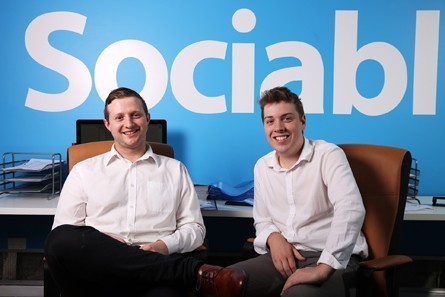 At age 21 Brandon Reynolds is surveying the Sydney harbour from on-board a $15 million cruise liner.

In a few hours he’ll be meeting with a room of “wealthy” private investors who are looking to back his startup that was born in his Adelaide bedroom when he was only 19.

The idea has come a long way since then, closing two funding rounds and now valued at nearly $9 million.

Now it’s time for Reynolds and co-founder Jarred Hrotek to finally present their startup to the world.

“We’ve been working so hard for so long,” Reynolds tells StartupSmart.

Connecting users with their heroes

Sociabl is an app that allows users to purchase a one-on-one video call with a wide range of partnering celebrities, with half of the profits going to a charity of their choice.

A wide range of AFL players are already on board, including Gary Ablett Jr, along with the likes of Jimmy Barnes, Shane Warne and Ian Thorpe.

Nearly three years after the pair began working on Sociabl, the app is now available to download from the App Store and the startup will be holding a lavish party on the harbour next week to celebrate the launch.

“It’s a celebration of how far we’ve come,” Reynolds says. “And the more we can prove our legitimacy the bigger we can become.”

The launch party will be attended by minister for industry, innovation and science Christopher Pyne and opposition leader Bill Shorten, but the pair was on the verge of having an even bigger politician as a guest – with Malcolm Turnbull slated to appear before being summoned to the White House to meet with Barack Obama.

“The bipartisan support for innovation and our startup is exciting,” Reynolds says.

“It’s exciting to have the support from the government on a global stage for little old Sociabl, which started out of my bedroom three years ago.”

On the hunt for further funding

After launching the app last week, Reynolds says they’ve already sold $6000 worth of videos before beginning any marketing.

“The really big sign will be once we get the talent themselves pushing it online,” he says.

On the back of the recent launch, Reynolds and his co-founder will be meeting with potential investors to close another funding round.

“It’s going to be challenge over the next months to track how it’s going and how much funding we’ll need for exponential growth,” he says.

The key to his success

Reynolds attributes much of his success at such a young age to one simple thing.

“In one word, what made Sociabl happen was persistence,” he says.

“I started off in the startup community and in co-working spaces. The biggest problem I see is people not following through with their ideas. Persistence is the biggest thing.

“Anyone can do hard work for six months but if you don’t follow through it’s for nothing.

“The difference between a good idea and a good business is that you follow through with it and persist.”