How an idea thought up over a couple of beers became a 200,000-strong startup movement 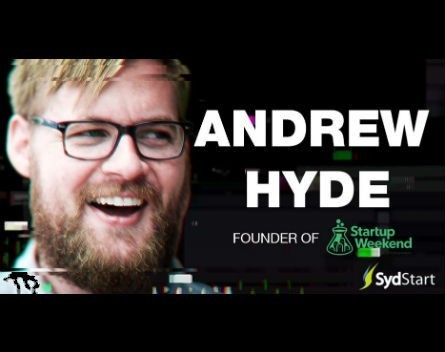 A simple idea Andrew Hyde thought up over a few beers with friends has spread to so many countries around the world that he can’t even name them all.

Speaking at SydStart 2015, Hyde says that community is the most important part of fostering and encouraging entrepreneurs, and this is the core aim of the Startup Weekend concept.

The first Startup Weekend was in Hyde’s hometown and was run without a budget.

“I wasn’t connected, I didn’t have any money – I was just in a room at the right time,” Hyde says.

In the time it took Hyde to buy some more beers, a logo had already been made, and it soon began to spread around the world.

The events are all about building a foundational community, Hyde says.

“The idea was to create a startup over a weekend to build a community,” he says.

“The community is the building block of what you do with a startup.”

For a community to be worthwhile and effective, there are a number of key factors that have to exist, he says.

“When you build a really long and meaningful community, everyone feels welcome, every voice is valued and everyone can be complex,” Hyde says.

“It has to be collaborative. Try never to say ‘them’ – there’s no such thing as ‘them’ when you’re talking about culture and community, it’s all about ‘we’.”

In his time travelling across 67 countries to see his Startup Weekends in action, Hyde has learnt a thing or two about creating startups. He says it all boils down to a founders’ core values.

“If you are starting something, who you are is probably the most important thing,” he says.

“A lot of people get caught in this trap of wanting to be a unicorn. But a lot of stuff happens in this industry and it doesn’t matter much apart from who you are.

“You should spend a year working out who you are and what you want to build.

“You have to be passionate about your work and your core values have to play a part of it. If this isn’t who you are then you’re going to fail.”

Hyde says that he often sees founders make the mistake of thinking it’s what they pitch that matters, when it’s actually about what the people they pitch to say to others about the startup.

“What you give to the audience is just the beginning, it’s all about the story of a story,” he says.

“What people tell others about your pitch is the actual story. If your story of a story is doing well, then your startup will do well.”

In the end, it all comes down to how much you’re willing to put in, and how supportive the community that surrounds you is.

“You have to do the work. There’s no secret sauce that’ll get around the actual work it takes to do a startup,” Hyde says.

“Work half a day, every day. It doesn’t matter whether it’s the first 12 hours or the second 12 hours, just work half a day.”