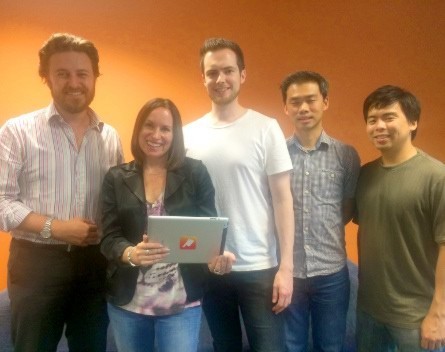 We’ve all heard of design by accident, but cooking app founder Jodie Moule can go one more and claim a successful app by design accident.

Having written a book Killer UX Design, she wanted to bring the process the book advocated to life. After she couldn’t get any existing clients to volunteer, she set about creating the Cook iPad app with her fellow authors.

The app has now become much larger than the book that inspired the idea.

The app launched in September last year, with 500,000 downloads in the first three weeks. To date the app is just shy of a million downloads, with users uploading 250,000 recipes. These include additions by renowned chefs Neil Perry, Guy Grossi, Luke Mangan, Maggie Beer and Matt Moran.

Moule says they have been overwhelmed with the response, particularly since it’s still iPad only, with plans for mobile versions soon.

Their approach to developing the app has been very hands on, with Moule and her team going into people’s kitchens and spending time with them cooking at home.

They targeted groups they thought would be interested in their idea, such as foodies and food bloggers, but were also conscious of getting feedback from people who didn’t meet their user profile.

“We deliberately approached people who thought they couldn’t cook and challenged their perception on that,” Moule said.

What they found was that people wanted to create and share family recipes with their friends and family and had no easy way to do this. It’s this sharing aspect that Moule believes has spurred the apps popularity.

While she’s proud of the number of downloads, she believes the engagement with the app is of much greater importance and the real proof of their success.

Thousands of recipes are created and shared a day, with users spending as long as 15 to 20 minutes in the app on average.

“When you’re creating product, everything comes back to engagement,” Moule says.

They are still deciding on the best monetisation strategy, but the app will remain free, weighing up possibilities like an advertising model or in-app purchases.

She says despite their huge success, most Australian investors are still grappling with the fact that they have yet to figure out revenue.

Having bootstrapped until now, they are looking for funding of around $1 million to take the company where it needs to go, with the funds most likely to come from overseas.

“I’m heading to New York to talk to investors and we’ve had a lot of good interest from over there,” Moule says.