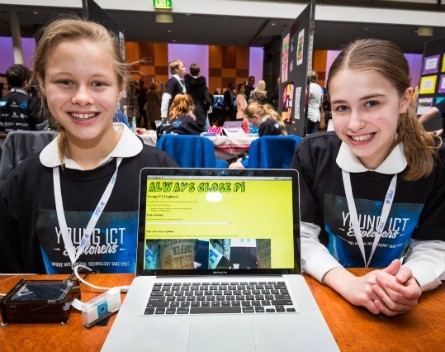 Visiting a friend’s house to watch coding tutorials online doesn’t sound like something a typical 12-year-old would do.

But Sophie Allen and April Draney are not your average 12-year-olds.

Computer programming is a much-loved hobby for the pair, who attend Sydney’s Roseville College. They have won first place in their age group at SAP’s ICT Young Explorers national final last weekend with Always Close Pi, a device that helps care for people living alone.

Their design uses a camera to take a photo every fifteen seconds, with any image containing something new inside its frame uploaded online. Families could check the photos to make sure their loved one is on the move.

Sophie’s grandfather was the inspiration for the idea. He lives alone on a farm and the girls’ invention would assure the family he is safe. Sophie says another family friend has also expressed interest in their device.

“She lived right down the street from her grandmother who fell, couldn’t find her stick and couldn’t get up,” Sophie says.

“The family didn’t realise until the next morning.

“We’re saving people from getting hurt and, if they do get hurt, someone can get there as soon as possible.”

The girls both say they love the universality of computer coding language, and feel empowered by its possibilities.

“You can control the computer and make it do whatever, whenever,” April says.

She’s determined to see technology integrated meaningfully throughout the school curriculum, something she says will improve students’ job prospects in later life.

“I think being able to understand that technology is going to be infused into every career, and being able to control or create this technology, will make a big difference to their employability, particularly when they’re preparing for jobs that they don’t’ even know exist yet,” she says.

While April dreams of being an artist, Sophie is an aspiring computer game programmer.

“I’ve made small games, of course. But I’d like to one day be able to code my own game and for people to actually be able play,” she says.

Woldhuis suggests they might work together, April on design and Sophie as programmer.

The girls’ achievement is significant in a field still dominated by men. The Australia’s Digital Pulse report from Deloitte says just one-fifth of Australians with a STEM qualification are women.

But perhaps the tide is turning.

“Girls can do anything boys can do,” April says.