Jessica Watson’s next great adventure after sailing the world solo 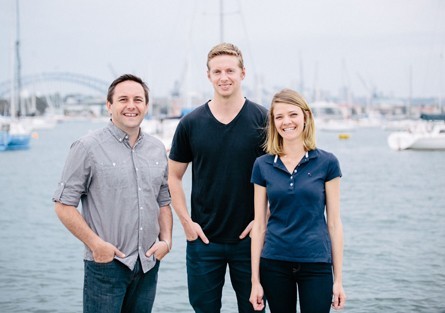 Six years ago, a 16-year-old girl set sail from Sydney in a small pink yacht.

More than 200 days later she returned with the eyes of a nation on her.

Jessica Watson was the youngest person to sail solo and unassisted around the world, and would later pick up Young Australian of the Year and the Order of Australia while she was still a teenager.

From someone that achieved such successes at such a young age, Watson was regularly asked a question she was already considering herself.

“What do you want to do next? – that’s the first question everyone asks me,” Watson tells StartupSmart.

“And it’s a valid question.”

While successfully completing a number of competitive races around the globe, it was another world entirely that she has eventually settled on.

Three months ago, Watson took on a position at a startup.

“Everyone expects me to go and do another big sailing adventure,” Watson says.

“The problem for me is that would have almost been the easy thing to do. That was my comfort zone, whereas studying and doing this has really been out of my comfort zone.

“I’ve really enjoyed challenging myself in a really different way.”

After originally hearing about Deckee, an online platform for marine reviews and recommendations, Watson reached out to its founder Mike McKiernan recently to say she “loved” the idea and wanted to be involved.

It was an easy decision for Watson – she was already immersed in this community and knows of the need for a platform like Deckee.

“I absolutely love the way the marine industry is all about word-of-mouth,” Watson says.

“You rock up to a marina somewhere and there’ll be ten people telling you where to go next, what business you should use and all these tiny little technical details, as well as the big ones.

“But there’s just nothing online. You’ve got these beautiful huge big books but they aren’t the most practical things to have on the water to start with. People have been crying out for something online.”

For someone that rose to the world’s attention when she was 16 and hasn’t looked back, with a book under her belt and a movie about her journey to come, Watson wants to stay on the move, and Deckee provides an outlet for this boundless enthusiasm.

“I get bored easily so it’s fantastic to have something like Deckee to throw my energy into when I do have a couple of days where I’m lacking things non-stop,” she says.

“There’s always something different which is fantastic.”

At such a young age, Watson faced countless media interviews. But now she’ll be on the other side, taking on a communications role at the startup. It’s a change that she’s very excited about.

“I’m completely on the other side of it now,” she says.

For Watson, the world-conquering journey is now well in the past – it’s a treasured memory and a point of pride, but it’s not what she wants to define her.

“I’ve changed so much. That’s what I’m proud of, that I’ve changed and learned different skills in the time since.”

Although making the jump into the startup world may be surprising for most, Watson says it was a “natural decision”. Despite flirting with the competitive sailing world, where she was unsurprisingly successful, Watson says she eventually came to see sailing in itself as a hobby rather than a profession.

“I’ve come to realise it’s something I want to do for fun on the weekends,” she says.

“I want to be around the industry but I don’t want for sailing to be my job, I want it to be a fun thing.

“I was realising that I’m not actually competitive. I did have something to prove to myself and I realised I want it to be fun. There’s certainly things I want to do in sailing for the rest of my life but for now it’s a weekend thing, and that’s fantastic.”

For McKiernan it’s not just about bringing a big name to his small startup, there’s the wealth of knowledge and industry experience that Watson brings with her too.

“She brings a lot of industry experience for us and she’s really passionate about supporting the growth and development of the boating industry, particularly online,” McKiernan says.

“It’s a perfect way for her to become more actively involved in it.”

Watson also sees her role as being more than marketing.

A wave of disruption

McKiernan first came up with the idea of Deckee two years ago from his own interactions in the industry.

“It comes from my experience working on mariners over a number of years,” he says.

“I was down there on the docks helping boat owners every day and I realised there was this really strong word-of-mouth culture in the boating community, but there hasn’t been any website that is capturing all those opinions and recommendations that are being shared as a trusted source.”

Deckee is all about the community, he says, acting as a Trip Advisor of sorts for an industry that is yet to fully embrace the digital revolution.

“The boating community has been heavily underserved from a technical standpoint for a long time,” he says.

“They’re becoming increasingly aware of a need to shift to digital, and we’re going to be well positioned to capitalise on that.”

It’s an obvious solution to a clear gap in the marina world, Watson says.

“The thing that struck me was why hasn’t this been done before?” she says.

“You’re dealing with a lot of small businesses that don’t even have their own website. That’s a fantastic opportunity to give them that platform but it’s a long education process.”

The platform aims to provide the all the resources that a boat owner would need in one place, filled with reviews from the community. Businesses can join the network for a monthly fee, and the startup will eventually be taking commissions on its referrals.

The startup closed a seed funding round of $90,000 late last year and will soon be looking for further funding to accelerate its growth.

It’s a large market locally, with an estimated 1 million boat owners spending about $2 billion yearly on storage, services and products. But Australia is just the start, McKiernan says.

“Australia is a really good test market,” he says.

“The size of the industry here and the demographics of boating is a perfect way for us to test a lot of ideas we have, but ultimately we’re looking at the global industry and to develop a solution that can really cater for boat owners worldwide.”

Another trip around the world

No stranger to venturing around the world, Watson says there is huge international potential for the startup.

“You’ve got the same sailing and boating communities all around the world crying out for similar resources and that’s something we’re certainly keeping in the back of mind,” she says.

Since then it’s passed through the Slingshot accelerator program and picked up a slew of awards, including the best tourism solution at the NEWi Awards for Digital Creativity and Best Startup at the 2015 Australian Web Award.

For next year the focus will be entirely on Australia, but 2017 will see the startup look internationally.

“The next 12 months is really about developing brand awareness here in Australia and building a strong community here,” McKiernan says.

“Based on that we’ll be able to see what’s worked and what hasn’t and take it overseas.”

The flexibility and uncertainty of the startup world is ideal for Watson, leaving time for various speaking roles and charity work.

“The fantastic thing is I can keep a bit of flexibility with it,” she says.

“I’ll keep juggling everything next year. I would like to be putting a full-time effort into it, and that’s the way it’s looking at the moment.”

“I love that I’m constantly on the road.”

She says entering the world of startups and innovation has been another rewarding challenge.

“I haven’t had too much exposure to it before,” she says.

“It’s exciting and there’s so much happening. It’s awesome to be part of that and part of it in a unique way. This industry just hasn’t been touched or mentioned in startup culture so this s very exciting.”

Watson will be finishing a media and communications course in Melbourne over summer and has big plans centred on Deckee for the coming year.

“That’s the exciting thing,” she says.

“We’re seeing so much progress and so much happening so soon.

“It’s hard to know exactly where we’ll be down the track.”