Keeping Sociabl for this 20-year-old meant saying no to $2.5 million 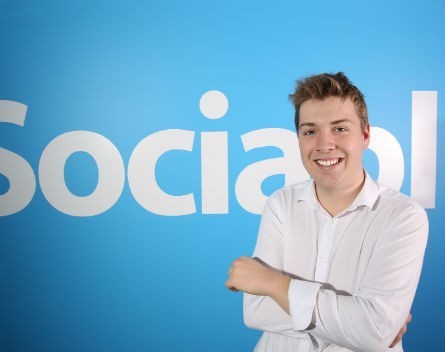 Brandon Reynolds was 19 and thought he had a billion dollar idea.

With no connections or knowledge of investors, the Australian teen scoured the internet and found the emails of every single member of the BRW Rich 200 List, and sent them a pitch for his startup, Sociabl.

The idea was for an online platform that allowed fans to receive a personalised video call from a celebrity, but Reynolds and fellow co-founder Jarrad Hrotek had little knowledge of how to land an investment.

“We had no idea, we were googling what venture capital was,” Reynolds says.

The first reply came from Xero CEO Rod Drury who seemed positive, and 20 others eventually got back to him. From there five meetings were booking, and one lead ended up being successful.

“It was a big bump of legitimacy and for him to put faith in us was pretty massive,” Reynolds says.

That was eight months ago, and now Sociabl has secured a further $60,000 investment which values the startup at $5 million, while the team is currently in talks for a larger round with local VC firms and international investors that would value it at about $8.5 million.

Sociabl is an app and online platform that facilitates video calls between fans and celebrities for a price. The startup has signed on a number of huge sporting, music and online stars ahead of its launch in Australia in December, including Chris Lilley, boy band 5 Seconds of Summer and numerous AFL players.

While celebrity obsession has often been pointed at as a negative, Reynolds says he wants to use it for social good, with half of all the profits from the calls going to the stars’ charity of choice.

The price for a call will vary greatly depending on the star power of the celebrity, but Reynolds says the benchmark will be about $500 for a two to five-minute call, which can then be downloaded afterwards.

“We’ve created something where the celebrities we’ve got on board will be able to sell very expensive video calls to raise money for charity,” he says.

“When you’re very passionate about your idol, your ideology sits on the same lines. It’s not a fundraising platform but it’s another way for idols to put money towards these awesome causes.”

The now 20-year-old Reynolds came up with the idea for the app while studying a bachelor of entertainment business at the JMC Academy in 2013, and has taken it from his parents’ house to offices in Adelaide, London and Los Angeles.

It was a pretty simple process really: he and fellow co-founder Hrotek decided they needed a billion dollar idea, and six hours later they came up with Sociabl.

The last two years have involved learning a lot about startups, securing a range of famous clients, developing the app and very little sleeping.

It’s been draining,” he says.

“I didn’t think you can have this little sleep and still be alive. But we’ve got a great team and I’m really excited about the idea. Every day we move a step closer and everyone gets excited.”

After an “awkward” two-hour meeting with an investor a few months ago, Reynolds was offered $2.5 million in exchange for 50% of his company. It didn’t take him long to turn it down.

“Sending that back with a ‘thanks but no thanks’, it was certainly a very tense moment when I pushed send on that email,” he says.

But with the way the startup was structured and the $200,000 already in the bank, the team was in a position to forgo the large chunk of cash to keep control of the company.

“We’re not making cars, we’re not building computers, we’re brokering and networking people with the biggest stars,” he says.

“If we play our cards right and get it all locked in there is massive potential.

“It validated what we’re doing to the rest of the industry and it was a crucial part of the process.”

The app will be launching in Australia in early December with a lavish harbour party.

“As much as it’s a launch party, it’s also a celebration of the last two years of work,” Reynolds says.

“We can all enjoy it before the 9am start the next morning.

“We’re at a stage where we’ve got the funding and all the milestones have been ticked off – the app is finished, the money is in the bank, and every hour we’re securing contracts. Once December comes along and we get it along it’ll be very exciting to see.”

Age as an asset, not a barrier

Reynolds may be only 20, but he says his age hasn’t held him back in the industry, and encourages other young entrepreneurs to have confidence in their ideas.

“In the startup community it’s almost the younger the better so long as you have the keys to the kingdom with an idea and drive,” he says.

“So long as you can walk the walk and talk the talk, your age isn’t a barrier, it’s an asset.

“If you’ve got an idea, you’re driven, you understand that it’s hard work and are talking to investors that are fairly switched on, your age doesn’t matter if you know what you’re talking about.”