Meet the Melbourne startup wanting to deliver you healthy takeaways 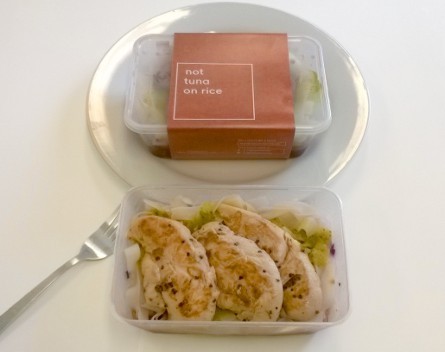 A Melbourne based startup is trying to take a bite out of the online takeaway business with a focus on healthy food.

This is Wholesome, launched last December, offers healthy dinners that can be delivered cold to your office, to be heated up and eaten on the spot, or at home later.

It currently has about 100 customers in the Melbourne CBD and surrounding suburbs.

Co-founders Luke McInnes and Deon Cavarra came up with the idea as they both were working late nights in the city and were struggling to find a healthy and easy dinner option.

“We’ve bounced probably 100 ideas off each other over the years,’’ McInnes says with a laugh.

“You’ve got all these people working in the city that are mid-twenties to late-thirties that are still eating unhealthy.

“We basically had the thought that there’s a massive market of people that want to eat healthy but currently can’t.’’

The pair can take sustenance from indications the online food delivery market is growing. Earlier this week German-based online food delivery platform Delivery Hero, which was founded in 2010 and now operates in 14 countries including Australia, raised $92 million in new funding, bringing the overall investment in the company to over $305 million.

“Our initial thought with the business, as we’re now reading it, is that the food industry still hasn’t been consumed by online,’’ McInnes says.

“I still don’t think in Australia we’re quite there yet, my initial thought was we could get it up and running and people will simply take to it.

“Australia’s at a point where we still need to have a physical aspect to it.”

In response to that notion, McInnes says This is Wholesome is focusing on getting its meals in cafes and gyms around Melbourne and “moving into the wholesale stockist model”.

The company has no specific goals set for future expansion just yet.

“Initially our plan was to get to the market as quickly as possible, we knew the first iteration of product wasn’t going to be perfect,’’ McInnes says.

“We want user feedback and so forth to change the business model over time.

“I certainly think the potential is there for 1000 meals a week, and even then I think we’re not even scratching the surface.”