Meet the startup CEO of the year 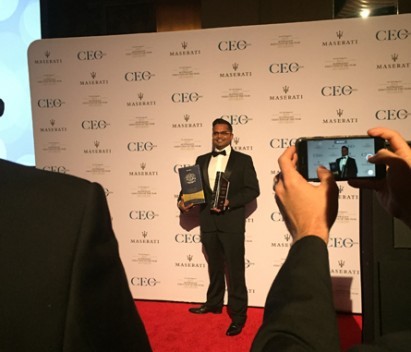 Anurag Chakradhar’s father is a Hindi poet, his mother is a singer and his sister is a classical dancer so you might expect him to also be in the artistic fields.

But last Thursday, Chakradhar was named CEO magazine’s startup executive of the year for his work at the helm of Blrt, an app that combines the features of phone calls, emails and video conferences onto the one platform.

So, how does a boy from a family of New Delhi artists become a celebrated entrepreneur in Australia’s burgeoning tech scene?

The Blrt founder says a combination of creativity, nuanced leadership and employee trust has helped him carve out an award-winning startup career.

Chakradhar, who first arrived in Australia during the dotcom boom of 1999, says his parents’ creativity has been an important asset in his career.

“The creative side of designing websites and creating architecture for apps was a good thing for me to do.”

Another one of the secrets to success Chakradhar shared with StartupSmart was his use of infrastructure from another of his startups, Thinkun, to support the fledgling Blrt.

This way, Blrt had 10 staff members from its first day of operation, and investors could feel confident the startup was in safe hands.

While the new venture wasn’t without its worries for Chakradhar he says it actually attracted new business to the original business.

“It showcased the ability of Thinkun to create something of this complexity while still providing a very good user experience,” he says.

“Too structured and rigid like a corporate, you can’t innovate,” he says.

“If you’re too flexible, you don’t draw any lines in the sand.”

He says communication is the key to winning his staff’s trusts and making sure they understand what the company’s direction is.

“It’s keeping the team focused on the right sort of thing, so they understand when you go to them and say, ‘Hey guys, everything we’ve been working towards on this part of the project, the data says it’s wrong, so we need to do this’,” he says.

“You have to be resilient.”

A measure of success

Chakradhar says it’s important for startup CEOs to network with other people in similar situations as a way to measure the company’s progress.

He says while other businesses can use their bottom line as signal of success, “that measure goes completely out the window” in the startup world where companies are yet to gain traction or attract an audience.

At the awards ceremony last week, Chakradhar was sat alongside Uber Australia’s David Rohrsheim and was excited to pick his brains about what was happening on the rideshare platform.

“Just being at the awards meeting up with him and CEOs was a great opportunity to actually talk to people from established companies and hear the sort of issues they’re having,” Chakradhar says.