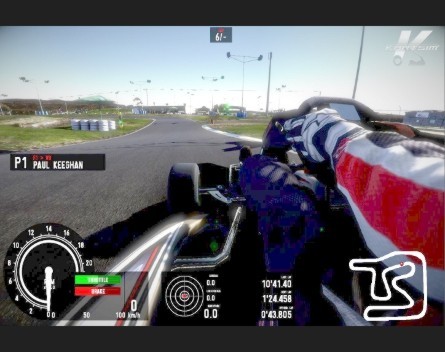 Nine years of hard work will soon pay off for a Melbourne-based entrepreneur who is on track to launch a racing simulator in early 2015.

KartSim is an online kart racing game for PC, Xbox and PlayStation 4. Founder Zach Griffin told StartupSmart he has always had an interest in racing games, but is more interested in the development side rather than playing them.

“I was always a fan of Formula One growing up,” he says. “In 2004 I started racing karts at a professional level at the same time as commencing a degree on game development. One of the projects was to create your own game. It merged the two interests I had and KartSim came out of it.”

However, the journey hasn’t been an easy one. Griffin says go-karts are far more difficult to simulate than race cars, which is why there aren’t many go-kart games.

“The physics around them is immensely difficult,” he says. “If you look at any other racing game out there like Gran Turismo or Forza, their core value proposition is to allow a player to drive a car they wouldn’t necessarily experience in real life. However, the actual racing experience is quite bland. You have a corner perhaps every ten seconds, where in KartSim it is a lot more intense – you are flying through a corner every 2-3 seconds and driving at speeds of up to 150 kilometres an hour just 18 millimetres off the ground.”

In a show of extreme patience and dedication, it has taken Griffin two years to get the physics behind KartSim just right. In that time he had to read countless academic white papers on the physics of tyres and engines and apply those equations in a real-time gaming environment.

“Resilience and persistence pays off,” he says. “I think really it’s about learning how to work with yourself and it’s incredibly import that whenever you have a small victory you celebrate and psych yourself up for the next bit.”

Griffin founded his own game development company, Black Delta, in 2012. He says the startup ecosystem in Melbourne – particular for the gaming sector – is growing.

“Melbourne has always been a hub for the development of racing games,” he says. “The studio environment in Melbourne is beginning to grow again after it took a hit from the GFC.”

In 2011 Melbourne-based independent gaming company Firemonkeys Studios was bought by Electronic Arts for an undisclosed amount. Since then it has gone on to develop successful racing games such as Real Racing 3.

“It is a tight knit group and people are very supportive,” says Griffin. “It’s good to see that startup mentality and spirit that America has always had moving towards Melbourne.”

“It was great to connect with other people and entrepreneurs that were there,” he says.

Griffin is the sole founder and points out that in his experience, it is critical entrepreneurs who are going it alone speak to other people who are going through the same thing.

“Go reach out,” he says. “Entrepreneurship is by its nature reasonably isolating. It’s not a path where everyone else around you understands why you are doing it.”

Griffin is currently in discussions with potential investors and says he expects the game to be released in March next year.