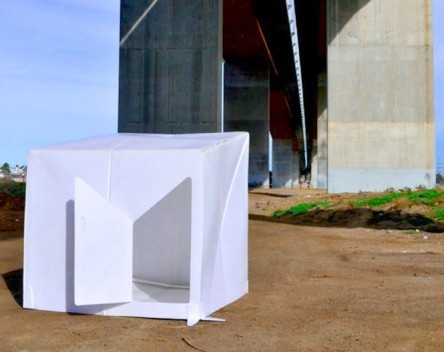 A Melbourne-based startup has designed and developed portable shelters for the homeless, which can be put together in less than two minutes.

Alastair Pryor, 25, says the idea for Compact Shelters came to him while he was working as a labourer in the city.

“I used to work as a scaffolder, and one morning I was making a lot of noise hammering which woke up this homeless man below me,” he says. “I felt for the homeless man as it was so cold, wet and windy. His living conditions would be painful during the cold, harsh Melbourne winter.”

Pryor says the shelter isn’t just for homeless people and can be used for aid relief during natural disasters or even for camping. The Compact Shelter is also designed so that individual dwellings can be joined together to create enough room for larger families. Several distributors around the world – including Singapore and the US – are interested in commercialising the idea.

However, the purpose of Compact Shelters isn’t to make a profit, says Pryor.

“The whole emphasis around it was curating a solution to fix a problem, which was an easier form of shelter for the homeless,” he says. “So it wasn’t really developed for profiteering purposes – it was developed to help people.”

The shelters took a year to develop with industrial designers in Melbourne and Pryor now says he has a “manufacturer ready to roll”. He says hard work and persistence pays off.

“Just remain determined and persistent,” he says. “If you’re determined you will excel. I strongly believe that determination is a key thing.”

The young entrepreneur is currently working on a range of similar projects, including a collapsible toilet for Oxfam in Britain. He is also working with the UN to create an antibacterial shelter that can be used as a portable surgery room during events such as floods or tsunamis.

Pryor studied entrepreneurship at Swinburne University. While he has deferred his degree in order to focus on his business endeavours, he says the university provided him with the tools to launch his startup.

“I don’t believe that entrepreneurship can be taught,” he says. “But I believe starting it has given me the advantage in applying what I’ve learnt at uni to a day-to-day business.”