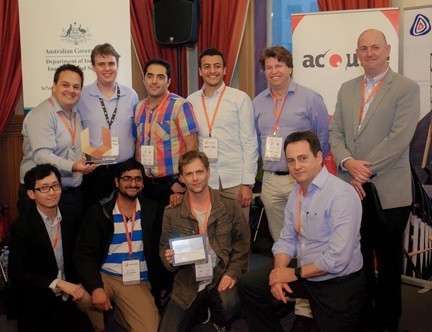 Smartphone alerts for miners who misuse equipment was the winning idea at a resources sector hackathon held in Melbourne last weekend.

The Unearthed hackathon was part of International Mining and Resources Conference and saw teams from across Australia employ engineering and creative thinking to solve a real-world mining problem inside 54 hours.

The winning team, Personal Protective Equipment of Things (PPE of Things), was made up of RMIT University students and CSIRO scientists.

They used Bluetooth sensors to track whether mining site clothing and equipment was being worn and operated properly. Mobile phone alerts can then be sent in real-time if hazardous situations occur.

“If you removed them off your head, even to put them on the ground, a message or alarm will say ‘you are on a mining site, you can’t remove your uniform’.”

Kailis says safety is a major priority on mining sites and needs to be taken seriously, and that the alerts would protect miners as well as inform management about breaches of procedure.

“It’s a relevant challenge in this day and age,” he says.

“We want to be able to address it quickly.”

Victorian resources minister Lily D’Ambrosio praised the PPE of Things for coming up with a low-cost, high-tech way of boosting personnel safety on mine sites.

“Unearthed is an innovative way to combine bright minds, leading technology and industry experience to come up with solutions to our real-world mining problems,” D’Ambrosio says.

Kailis would like to see more innovation in the resources sector.

“Companies want to embrace it, they just don’t know how,” he says.

“That’s why we started this program. We can educate these companies about what they can gain from taking part in a hackathon event.”