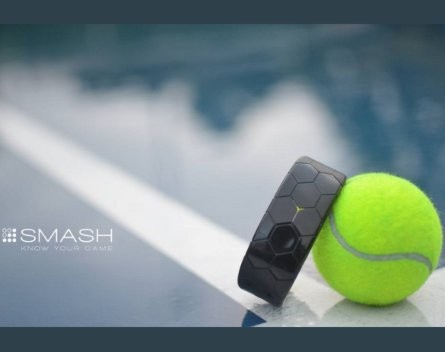 For a piece of impressive technology, Melbourne born and built, Smash Wearables has a pretty humble premise, and that is to help people be better at something they care about. In this case that something is tennis, born out of the desire of founder Rob Crowder to improve his second serve.

The company, which has just launched its Kickstarter campaign, has developed the world’s first responsive coaching wearable for tennis in the form of a lightweight wristband. The band is connected to an app that provides easy access to technique analysis and personalised recommendations.

The story of how this company came to be is almost as impressive as the hardware it’s created. It’s the ultimate tale of collaboration driven by a passion to do something useful, and testament to Crowder’s early recognition that he “needed experts around me”. And dare I say, a touch of serendipity.

In the beginning, Crowder quite simply, wanted to get better at his tennis game, and thought about ways that he could “stretch technology and create an experience that was really helpful”.

He noted that most wearable technology currently gives consumers a lot of insight, but does not actually change habits.

He’d had a few tennis lessons at Melbourne Park and found that when he focused on consistency of swing, with guidance, then his game improved “like magic”.

So with a background in physics, he tracked down some sensors he thought could track his movements and taped one to his wrist. The sensors tracked his form at 250 movements per second, so with some time and sorting through a lot of data and graphs, he recognised a pattern in his swing and the fact that so much of his performance came down to timing.

He came across a Melbourne company, Procept, which had some experience working with sensors, mostly with mining and medical rehab, and got their attention when he told them what he was working on. Better still, Procept was a registered provider of a “Technology Development Voucher” which meant that they could access $50,000 funding while they developed the idea.

But Crowder still needed some help creating the software to power his idea and he approached software and UX company Cogent next, who actually took a small investment in the company. By this time Crowder had left his job at PwC and took a job working with Cogent, doing business development and marketing as well as working on Smash, quite simply because he enjoyed working with them so much.

It was then time to source expertise on the design of the wearable band and Crowder managed to track down Katapult Design, who are experienced industrial designers.

While it’s easy to extrapolate how the concept can be applied to many other sports, for the moment, Crowder plans on focusing just on tennis. He says that although the technology could be applied to other sports, the challenge is creating and refining the algorithms which are smart enough to deliver a sport’s specific recommendations. That, and tennis, is his passion.

There are a couple of competitors on the market, racquet maker Babolat (which has sensors in the handle) and Zepp (which places sensors on the butt of the racquet), but is mostly concerned with acceleration rather than improving consistency in one’s game.

So how did Crowder manage to grow his hardware idea to a delivered technology outcome, score a supportive job and investment in just 18 months (with three to four months lost waiting on the government TDV notwithstanding)?

“I figured out early what I needed to happen and I stuck to a plan,” he says.

His big vision is to become a company that uses data to make people become better at the things they love.

“I love tennis, and I love that feeling that I have when I play well,” Crowder says. “I want to give more people that feeling.”