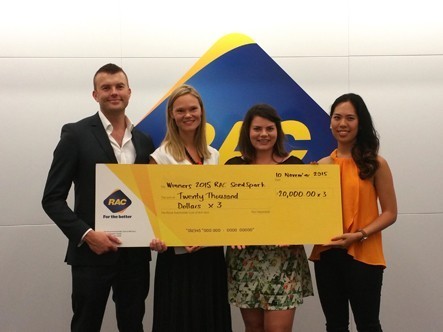 It is the first time the motoring club’s 250,000-strong membership has been asked to pick a winner and almost half the voters opted for CareCollective, the brainchild of WA entrepreneur Caris Jalla.

Jalla, who has worked in the disability sector for 11 years, says CareCollective helps families find nearby carers who match their loved one’s needs.

“One of my friends has a son with autism, and I’ve heard stories about how hard it is to find support workers last minute,” Jalla says.

She says some families are even using Gumtree to source disability care.

But CareCollective offers a safe and convenient way to find help, with users able to search for support workers by language, gender and even hobby.

“If you want to go to the movies, you’d rather someone who’s into film than someone who is outdoorsy,” she says.

CareCollective arrives at a time of flux for the disability sector in Western Australia.

While the National Disability Insurance Scheme (NDIS) began rolling out under the Gillard government in 2013, WA’s state government wants to run a localised version of the scheme called My Way.  The state has resolved to trial both systems.

Jalla says the both systems give families more choice than before, but they need to know where to find help.

“Services need to be able to market themselves,” she says.

That’s why her platform isn’t just for those who need care. Service providers can register with the site for free, giving them the chance to be found by potential employers.

The $20,000 cash prize is accompanied by an eight-week accelerator program, both of which Jalla says will help her develop the CareCollective website and app. She also says there’s some interest from venture capitalists and angel investors.

“There’s a couple in mind that I’ll follow up,” Jalla says.

“I’m also looking at applying for other grants and using the funding we’ve secured to say, ‘this is our contribution, can a grant or funding provider match it?’”

“There’s a lot I need to learn, so I’m looking forward to that intense practice.”