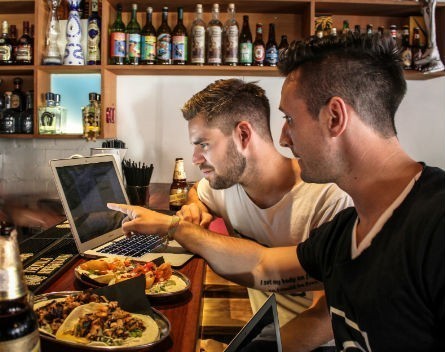 So they decided to head to the pub, along with AngelCube co-founder Adrian Stone, and that’s where they came up with the idea for Class, a hotel booking app, which they say is the world’s fastest.

Class is a mystery hotel app combined with traditional hotel loyalty program perks. Users drop a pin in the app general area where they would like to say. A list of hotels, four star and above, appear with as much details about the rooms, without giving away the hotel’s name. Unlike traditional loyalty programs, Class is not tied to any one hotel, meaning users can book a number of hotels, and still receive rewards like free upgrades, dinners and bottles of wine.

“We’re not just going after people who are going after secret hotels, or last minute hotels. We want to convert all the people who book normal hotels transparently too,” Lee says.

“It’s an experience play. We’re targeting frequent travellers, weekenders, or people booking hotels to take their missus to the city for the weekend. They’re not particularly bothered with the brand name as long as its decent quality. As long it’s a fair city price.”

Robinson bristles a bit at “experience play” characterisation. “I love Class because it’s literally hassle free,” he says with a smile.

The power of Mexican beer and banter

Hotels that appear on the app are curated and an algorithm helps narrow down that list by calculating the average city price.

Lee and Robinson, who both moved to Australia from the United Kingdom, met during a “night of taco filled banter”.

“We basically got pissed on Mexican beer and ended up deciding that we both wanted to start something,” Lee says with a laugh.

“Three weeks after we met we flicked an application to AngelCube thinking it was a real wild card.”

About a month after sending their application, Lee and Robinson found themselves sitting across from AngelCube co-founders Stone and Nathan Sampimon pitching their original idea Lift, a fitness app. Lee and Robinson are coy on the details.

“We’re convinced it’s still a good idea, it’s going to get done by somebody,” Lee says.

Sampimon and Stone were not convinced.

“Nathan and Adrian were like ‘love the team, hate the idea’,” Lee says.

So Sampimon and Stone gave them a week to prove the idea, and 24 hours to read Eric Ries’ book The Lean Startup. At the time, Lee was working 6am-12am shifts at Crown Casino, but Sampimon and Stone were unmoved. Lee says their response was simply, ‘If you want it, get it done’.

“So I was under the desk at Crown, reading this lean startup book for the rest of the day,” Lee says.

After a day of multitasking Lee would finish the book, and was able to explain how the concepts in The Lean Startup applied to the startup they were pitching to AngelCube. It was enough to be accepted. Shortly after, they began to realise their fitness app might not work. Lee says it took them a week to disprove the theories behind Lift and realise they needed to go back to the drawing board.

After “knocking heads” with each other and “hitting the whiteboard a million times”, they settled on developing a hotel booking app. The idea came from Lee and Robinson’s experience as business travellers. Stone agreed to join as co-founder and they got to work.

Robinson, a developer by background, started fleshing out what a Class app might look like, while Lee went in search of customers, specifically business travellers at Melbourne airport. After walking around with a survey at the terminal he realised the best answers were going to come from travellers in the business lounge. So he bought a virgin flexi business ticket to get entry, which he could get a refund for later, and spent the day chatting to people about Class.

“I was subtly pitching to them and it allowed us to get really quality feedback. The great thing is you’ve got a captive audience there. It’s the only place where business travellers sit still,” he says.

Most of Class’ fellow startups in the AngelCube program had some form of traction when they entered AngelCube, but Robinson says Class didn’t really launch until the 12th week of the 13-week program. It’s been in the months following the program’s end that Class has shifted its focus onto user acquisition. That will remain the focus for the months ahead while also making the reward system completely automated. Soon the startup hopes to launch in the United States.

Class’ competitors aren’t trivial. They include travel giant Expedia, which recently purchased Wotif for $700 million and Rocket Internet’s Hotel Quickly. Lee and Robinson are aware of the scale of the challenge, but aren’t discouraged.

“We’re funded essentially. So we’re just working our arse off in terms of proving the concept and getting our app ready to flick to the states. It’s a huge opportunity for us,” Lee says.