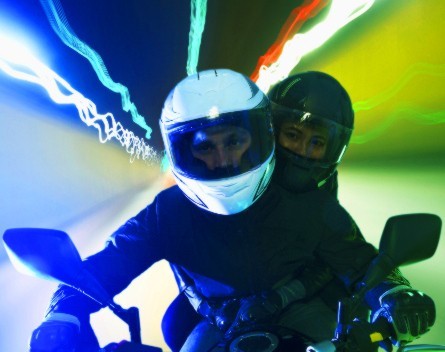 One of the winners of last week’s Sydney Genesis startup competition aims to make riding a motorbike in wet conditions a whole lot safer.

It won the commercial section of Sydney Genesis, while online charity platform Pledger took out the social section.

Hydrophobic Plastics co-founder Edward Smith says the team had a breakthrough around one and a half years ago, when they achieved the lotus effect on polycarbonate, the material made to use motorcycle helmet visors, something he says has never been done before.

The lotus effect refers to very high water repellence, essentially this means water droplets don’t form on the visor, they will always roll off.

Smith is currently studying a Masters of International Business at the University of Sydney, but completed undergraduate studies in the US and before that worked for the US Air Force.

It was on a trip to visit his co-founder in Sao Paulo, Brazil, who he met while studying, that the idea was born.

The original plan was to develop goggles, but during his time in Sao Paulo, Smith recognised there was a need to increase the safety of motorbikes.

“When I got to Brazil, I noticed there was a ton of motorcycle riders who would ride really recklessly, and when it rained it didn’t stop them from riding that way,” he says.

“I asked my friend, ‘Is this normal?’ because this is not common to the developed world and when it rained there was lots of accidents.

“My friend wanted to make goggles, and I wondered if there’s any way we can use this polycarbonate and transfer it to a visor.”

So that’s what they did.

“When you’re driving a motorcycle in the rain, you can’t see,” Smith says.

“The water droplets sit there and they’ll start forming layers, but you need to be able to see in order to react.

“You’ve got to be able to see the potholes, the dangers, the puddles of water.”

Currently they’ve been able to achieve the lotus effect on polycarbonate while getting around 75% transparency, but with the right support Smith believes they can get that number to 95% within the four to six months.

He says the technology has the potential to be used in ski goggles, security camera hoods, riot visors and shields.

The Sydney Genesis Startup Competition is run by the University of Sydney Business School and is sponsored by Servcorp.

Servcorp chief operating officer Marcus Moufarrige says given Servcorp itself was a startup, it feels the need to give back to that community, not to mention the fact that startups having success is good for its business.

“Servcorp was an Australian startup and came from an innovative idea and we’ve continued to innovate within our business and develop leading Australian products,” he says.

“We think that’s the best way forward in transforming the economy, moving from a mining backed economy, to a services based economy.

“So we really want Australian businesses to innovate, to create ideas that they are going to export.”