School-leaver proving a class act in IT and business 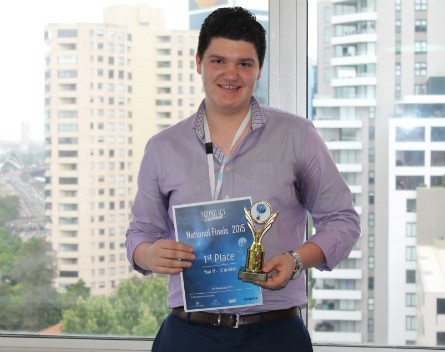 Blake Garrett is a fixer.

The 17-year-old graduate from Sydney’s Chatswood High School gets a kick out of using computer programming to solve other people’s problems.

“I sit there some nights looking at the computer, thinking, ‘how I can make things better?’” Garrett tells StartupSmart.

So when the tech-savvy teen overheard teachers complaining about his school’s eLearning system, Garrett sprang into action, making a note of each gripe so he could mend them.

The result is School Bytes, a secure online platform where teachers and students can share resources and manage data.

The online tool won Garrett top prize at SAP’s ICT Young Explorers contest this month and has already attracted attention from the NSW Department of Education.

He has met with the department’s enterprise architects about the possibility of intergrating School Bytes throughout the state, with official trials already set to begin at Chatswood and Mowbray Primary School next year.

Garrett has even contacted other educational providers, such as video service Clickview, to make sure his platform is compatible with theirs.

Eventually, Garrett foresees schools paying a yearly subscription fee for his product, with a portion of the revenue donated to Ronald McDonald House and UNICEF.

Such negotiations suggest Garrett isn’t just a tech-head: he’s got business acumen too.

The high school graduate started a web development company three years ago and says his commercial nous has been critical in communicating his ideas to others.

“Having both technology and business knowledge makes it easier to explain it to different people,” he says.

While Garrett has applied to study electrical engineering at university next year, he says he’ll likely defer to focus on his burgeoning business.

Plus, Chatswood isn’t done with him quite yet.

He’s currently redesigning the school’s website and they’ve offered him a part-time IT job.

Whatever his decision, Garrett says he’s looking forward to a future working in ICT and encourages other young tech entrepreneurs to pursue their ideas.

“If they’ve got the time and interest in IT, go out there and get it,” he says.