“Show me the honey!” How being found by bees, inspired this GPS-enabled, thief-proof, beetle-trapping hive 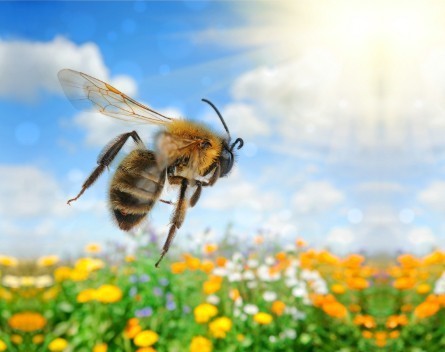 Technology is not often associated with bee hives, but Queensland’s Hive Haven has integrated GPS (BeePS, perhaps?) trackers into its apiaries, which have been specially designed to combat small hive beetle without using insecticides.

The journey of Hive Haven founders, husband and wife team Ann and Jeff Ross, into the honey industry began two years ago when they discovered a hive in a wall of their workshop.

“People told us to poison it, but we made an external box with a funnel, it took a couple of months to teach them to go in and out of the hole, but eventually we were able to get them out and put them in the backyard in a traditional box,” Ann says.

“The bees found us really.”

It was watching the bees during this period, and researching hives, that Jeff realised there was a problem to solve.

Small hive beetles are a big problem for beekeepers. They enter bee hives and can lay up to 200 eggs per day, their larvae then feeds on the brood, pollen and honey.

“I was watching them and trying to trap the beetles,” Jeff says.

“Without going into too much detail, our apiaries basically work based on the behaviour of the small hive beetle and the bees.”

Hive Haven’s apiaries have GPS trackers and RFID technology built in, which notifies beekeepers when lids are removed, or the whole hive is being taken by potential thieves. It also comes with a reader which enables beekeepers to monitor things like honey harvests and queen replacement.

Ann says traditionally apiaries have been generally made out of timber sourced from old growth forests and therefore are unsustainable. Hive Haven apiaries are made out of recyclable materials and are designed to regulate temperature, so as to protect bees from heat waves.

At a time when honeybees have been vanishing, apiaries like these are extremely valuable.

“They’re better for the environment and a better return on investment for the beekeeper,” Ann says.

Last weekend Hive Haven took out one of the top spots at the annual Innovation Centre Sunshine Coast Business Pitch competition, winning a prize package valued at over $20,000 that will help accelerate their business growth.

“We’re still in the concept stage but winning this award has validated the potential of the opportunity,” Ann says.

“We hope to iron out any bugs, get some feedback, and next year do a small production run.”