Smart money’s on Oomi as it raises $US1.5m on Indiegogo 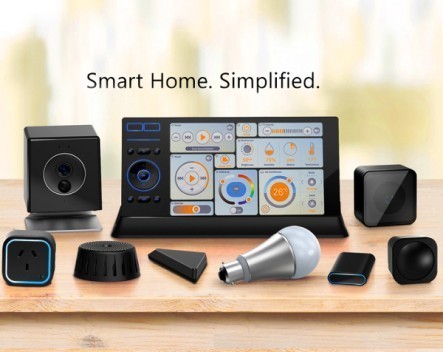 With 25 days left to go the startup, which is also based in China and the United States, has already raised more money than fellow smart home startup SmartThings, which raised $US1.2 million on Kickstarter in 2012. SmartThings was later acquired by Samsung for $US200 million.

The Oomi Cube is a smartphone hub that features eight environmental sensors, a night vision camera – tools which allow it to monitor a user’s home. Combined with Oomi Touch, users can control all smart devices in their home, from lights and music, to television and thermostats. Oomi has also developed a suite of accessories, light bulbs, speakers and cameras, all of which can be easily set up simply by tapping them with the Oomi Touch.

Oomi’s vice president Chris Hall says given the fact the startup was not relying on the crowdfunding campaign to create the products, they intentionally set a modest goal of $US50,000. However, internally they’d hoped to raise $500,000.

“We believe the time is right in the market. When you look at the awareness of smart homes, most people are aware of the connected home idea.”

Hall credits the strength of the crowdfunding campaign to the fact the startup had already begun to showcase its product to the market. Earlier this year Oomi’s technology was on display at the Consumer Electronic Show in Las Vegas.

It was at CES where Oomi was approached by Indiegogo management, who encouraged the startup to run their campaign with Indiegogo. Up until that meeting Oomi had a Kickstarter campaign that was set to launch shortly after CES wrapped up.

The startup has yet to raise any external investment and Hall says, while that’s “the next conversation”, ultimately Oomi is focusing on getting to the end of its crowdfunding campaign, with as much support as possible.

“Internally we’d like to think we could reach $1.5 million. If we could take that to $2 million, that would be great,” he says.

“The key difference between us (and other IoT startups), is they tend not to have a very good understanding of how the product moves beyond a community,” he says.

“One of the mistakes they make is having brilliant community support, but not other go-to market outside of that. So it can sit into markets like aged care, assisted living. So it isn’t the hobbyist, the enthusiast that buys the product, but someone who wants the solution.”