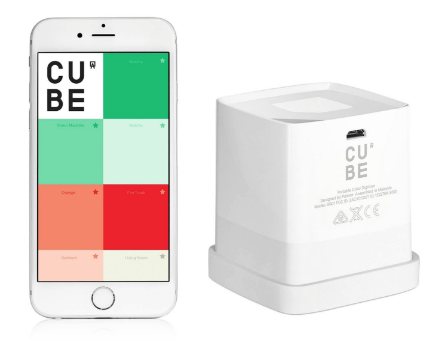 Palette, a Melbourne startup which successfully crowdfunded its colour-capturing Cube last year, has raised $1 million to add staff, and support its retail strategy.

The Series A round was led by Palette chairman Adam Lewis, a former managing director of McKinsey Australia.

The Cube is a portable device that can be used to capture the colour of any surface. It can then send that colour to a smartphone, or directly to photoshop via Bluetooth. Last year Palette, then known as SwatchMate, raised $100,000 on Kickstarter, and $51,000 on Indiegogo.

It has since shopped the pre-orders made by crowdfunding backers, co-founder Djordje Dikic says, which ended up costing roughly twice what was raised . It’s an example of just how tricky hardware startups can be. Earlier this year NinjaBlocks, a startup which ran two popular crowdfunding campaigns for IoT products, closed after it couldn’t find a sustainable business model.

“It’s incredibly challenging getting up and running,” Dikic says.

“It really comes down to having key distribution partners, for us we’ve been very lucky finding distributors who have experience selling similar products.”

Over the past 18 months the startup has generated $1 million in revenue and Dikic says the goal is to double that over the next six to 12 months.

“It’s an inventory heavy business producing your own products, so you need to be forecasting stock levels and requirements pretty accurately. You’re investing heavily upfront,” he says.

“But you don’t want to overinvest. Our approach has been to use very closely monitor where we’re at. We have weekly meetings examining projections, where our stock inventory levels are sitting. It’s hard to track exactly where it’s going to go. But we work closely with our manufacturer in Malaysia to forecast production load.”