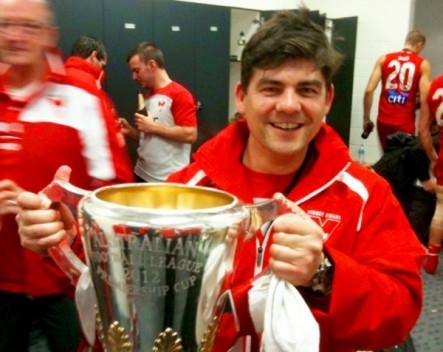 A new app by the podiatrist for two popular football teams is allowing users to scan their foot to determine which athletic shoes they are best suited to.

Shoe Buddy, which recently launched an Apple version of its app, aims to give consumers professional, independent advice on their footwear to combat marketing jargon and potentially fake online reviews.

Founder Dr Michael Kinchington has more than 20 years’ experience in sports medicine podiatry and is currently the podiatrist for the Sydney Swans and Western Sydney Wanderers.

Kinchington told StartupSmart it is not easy for the average consumer to decide which athletic shoes they should buy.

“I developed Shoe Buddy in September of last year and primarily I did it for the patients in my clinic so they could access the latest information on fitness shoes and help them make an informed decision regarding the correct shoes,” he says.

Kinchington says footwear is one of the areas in retail where the consumer can feel most disempowered.

“There’s a lot of misinformation out there in the marketplace and on the internet,” he says.

“Fifty to 70% – or even higher – of all muscular-skeleton injuries are lower-limb dominant. And when you think about it, 90% of the sports we play or exercise involves wearing shoes. We know from the science a shoe can improve performance and enhance comfort, but on the flipside it can be detrimental to health if you’re not wearing the correct shoe type for your foot.”

The health and fitness industries are ripe for disruption and need to utilise the internet and new technology better, according to Kinchington.

“All of our patients are now using ‘Dr Google’ to self-diagnose and get their information,” he says.

“We need a way of educating the patients. Quite often in the confines of the clinical rooms it’s known that only about 30% of the information is absorbed by the patient. The other 70% is not heard for a variety of reasons. So when they actually go home they start getting curious, jump online, and get a lot misinformation that way.”