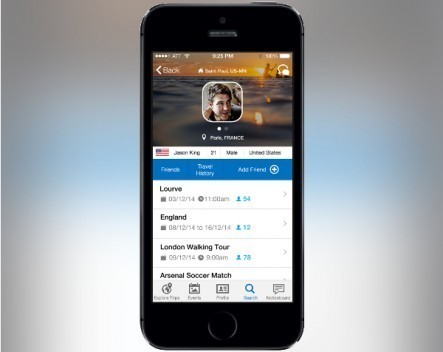 A Queensland startup is looking to help travel bugs find and connect with other travellers and attend local events or simply catch up for a drink.

Outbound, based in Brisbane, hopes to make it easier for people to make friends and meet new people when they are overseas.

The app allows users to create a profile and specify what kinds of travellers they are interested in connecting with – whether they be backpackers, corporate travellers, families or speak a particular language.

The platform also allows users to find events they wish to attend such as concerts, hiking tours or sporting matches.

Mark Cantoni told StartupSmart both he and his co-founder Ryan Hanly have travelled fairly extensively and have lived abroad in cities like London.

“That was several years ago but last year Ryan and I were talking and felt like it was a good idea for an app,” he says.

“So it just sort of spawned from there – it’s a social network for travellers because we felt that problem when we were travelling.”

Outbound launched in mid-January and has since been downloaded more than 4000 times. The app is free and available on iPhone and Android, with users in more than 90 countries.

Cantoni says while he would like to monetise the platform in the future, the priority at the moment is on getting people onto the platform.

“We’ve got an event section so we can have sponsored events or deals in any given location and we envision companies to pay to put their event or deal on there for a small fee,” he says.

“And one day a user might pay to upgrade the app to get access to these deals.”

Both founders come from non-tech backgrounds and enlisted an agency last year to build the app for them. The pair are now looking to bring on a technical co-founder.

Cantoni says he would encourage budding entrepreneurs who aren’t from a tech background to get themselves a mentor because it is “what we didn’t do”.

“We came through the school of hard knocks,” he jokes.

“I know there’s networks out there and we’ve just starting to network with some guys in Brisbane, which is great but we took it head-on and learnt along the way.”

Australia is seeing a number of niche social media startups crop up, including a social networking platform for neighbours and even one for people working in the mining industry.