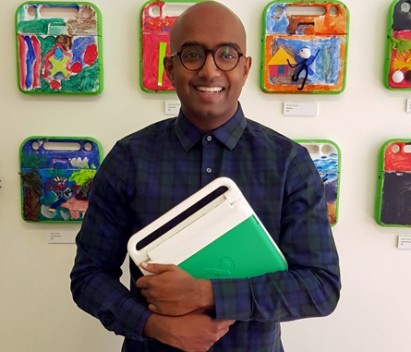 An Australian not-for-profit which bootstrapped development of a new school computer and tablet is asking the federal government for $10 million so every child in the country can have one.

One Education founder Rangan Srikhanta says the investment will be a small commitment from the government, which has already allocated nearly $1.1 billion to its innovation agenda.

“We want to reach millions of children,” Srikhanta tells StartupSmart.

It wouldn’t be the first time Srikhanta and his team received a large sum of money from the government either, with an $11.7 million investment helping One Education provide 50,000 low-cost laptops to disadvantaged children around Australia and the world.

One Education’s newest initiative Infinity is a tablet computer that can grow with students.

Srikhanta says the product is strongly aligned with the government’s focus on boosting STEM education and digital literacy.

A tech solution for schooling

One Education developed the product as a solution for schools, where investment in digital education is extremely expensive and inefficient due to restrictive upgradability and the cost to repair existing computers on the market.

With a pre-order price of about $330, Infinity offers schools a tablet that can not only be upgraded cheaply and easily but its parts are simple to replace, Srikhanta says.

“It’s a modular computer where the core modules like the battery, camera and CPU slot out in seconds,” he says.

The prototype was released through a brief one-month campaign at the end of 2015, which resulted in 1400 units pre-ordered by more than 25 Australian schools.

While this generated about $500,000 in revenue, Srikhanta says they now need to raise significant funding to roll out their technology to all schools.

“Kids need to get access to technology if they want to participate in a knowledge-based economy in the future,” he says.

With a mission to create fair and equal access to digital education, Srikhanta says government funding will be critical.

“This is very much about capacity building for the future,” he says.

Their ultimate aim is to provide an Infinity tablet to any student regardless of their socioeconomic background or school’s budget.

“Our product is significantly more advanced than what we previously offered,” he says.

“We want to get our technology in the hands of every child.”

The innovative piece of technology was created on an extremely tight budget, Srikhanta says

“We had to be very creative,” he says.

To bring their idea to life, Srikhanta says they outsourced tasks through Alibaba global trade platform and had lots of conversations via Skype.

“We did not take a single flight to make this machine happen,” he says.

The software was designed in Sydney while the electrical engineering was completed in India.

“We spent a few hundred thousand dollars to get Infinity this far,” he says.

This comprised leftover proceeds from their previous program, contributions from schools and use of existing resources.

As a not-for-profit, he says it’s a worthy achievement that they have been able to bootstrap the development of Infinity – particularly, in Australia, which doesn’t have a well supplied “tech city” like Shenzhen where inventors can rapidly prototype ideas with easy access to parts and components.

However, he says it also proves that there is opportunity for tech development in Australia.

“The fact that a not-for-profit has been able to design an innovative piece of technology does provide a blueprint for others wanting to get into this space,” Srikhanta says.