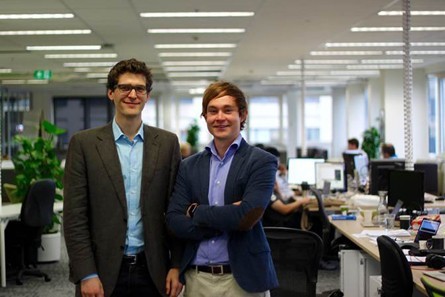 It was a desire to back his own ideas and be directly responsible for a company’s success and failures that led Alex Molloy to make the great leap of faith into the startup world.

While working in corporate finance, Molloy would sometimes have to wait years to see his ideas in action.

It was this frustration and lack of control over his ideas and the company’s ultimate successes that led Molloy and his fellow co-founder Richard Cotton, a financial consultant, to quit their stable jobs and dedicate their time to building a startup from the ground up.

“I think we both thoroughly enjoyed some of the challenges in those jobs, but fundamentally the big difference in startup land was the excitement of having an idea that’s yours and not someone else, and building it from scratch,” Molloy tells StartupSmart.

“Success and failure is riding on how you plan and what you do each day.”

Nearly six months after the pair made this leap, their startup, Valiant Finance, has officially launched.

It matches lending partners to its users through an algorithm. Small businesses answer a series of questions on the site that take “less than five minutes” and Valiant Finance will then “churn” this information against its lenders’ criteria and match it with those that fit the bill.

“It’s all about helping a small business get a loan,” Molloy says.

“We want to be the go-to source for small business when they think about getting funding.”

The idea is based around a well-known saying: “banks only give you money when you don’t need it”.

Molloy says it’s all about saving small businesses time and money, and giving them personalised information about the best avenues for loans.

“It’s really a transparent comparison of what the different options are on the market,” Molloy says.

The process is entirely free for the small businesses, with Valiant Finance taking a commission from the lenders.

Molloy says convincing lenders to get on board with the concept has been relatively easy.

“There’s a lot of interest in the Australian market both from borrowers and lenders in exploring the non-banking space,” he says.

“There’s a huge interest in talking to customers and trying to serve them, and everyone is facing the same challenge: getting small businesses through the door. So a service like we’re offering is quite attractive.”

The entire project has been bootstrapped by the two co-founders so far, and Molloy says they will soon be on the hunt for outside investors to help scale and grow the offering.

From abstract concept to something tangible and “beautiful”

Valiant Finance launched last week, and the co-founders are now working closely with customers to reiterate the platform and gather a wealth of feedback.

“You can sit in a room and think in the abstract for as long as you like, but nothing beats getting in front of people and seeing how they interact with the different elements,” Molloy says.

After taking the leap of faith from a stable corporate job to creating a startup from the ground up, for Molloy it was a relief to finally have something to show for his efforts.

“When you’ve got friends and family who trusted you in the decision to leave the job, they get a picture of the product but you can never communicate it perfectly,” Molloy says.

“You’re just working on this black box project for five months and your loved ones are looking at it wondering what you’re doing.

“Now we finally have something beautiful and intuitive that we can show them, and everything becomes tangible.”