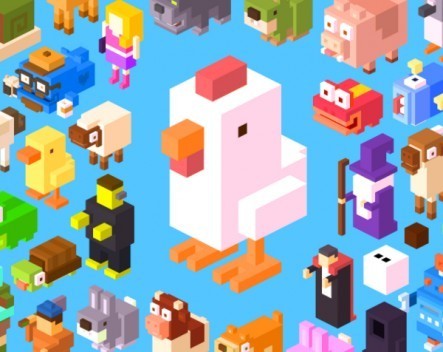 It took just 12 weeks for Victorian game studio Hipster Whale to develop Crossy Road, a free mobile game which is currently sitting at number one in the Australian iPad App Store.

The company says Crossy Road has been downloaded more than 2.5 million times in less than a week and it expects to reach the number one ranking in another 10 countries in the coming weeks. It’s number one in the family category charts in the US, Australia, Canada, France, Italy, Switzerland, Russia, South Korea and the Netherlands.

Hall says Flappy Bird redefined expectations of mobile gaming: players expect fun, fast-paced games, and a return of the score-based competition between friends of the retro era. While the success of Flappy Bird spawned thousands of copycats, Hall says Hipster Whale thought long and hard about what type of people were playing and why it was so popular. The name Crossy Road is a tip of the hat from Hipster Whale to a game they loved.

“With Crossy Road, it was more important to build a game that was really popular, that people would talk about. Monetization was secondary,” he says.

“We are very influenced by the golden age of retro gaming, where everything was incredibly fun to play, while still being a challenge.”

When Frogger was released in 1981, it was a coin-operated arcade game. For mobile app developers making money isn’t so simple. Crossy Road took the free-to-play approach; different characters can be purchased in-app for $1 each. However, all those characters can be eventually unlocked for free.

Hall says it was something he and Sum gave plenty of thought to. They’ve funded the studio themselves and have spent the last two months working on the game full-time.

“As a father I don’t necessarily feel comfortable with my daughter spending money and buying coin packs. I’ve been playing Skylanders with her and the idea of buying a character outright, it sits perfectly with me,” he says.

“I know this character gives her X amount of fun. We don’t have any $99 in-app purchases. From the beginning, Crossy Road was designed to be equally fun for anyone, even without paying a cent. As a result, our unlockable characters don’t make the game any easier; players still have an equal opportunity to get a high score.”

Crossy Road is available on iPhone and iPad with other platforms to follow.