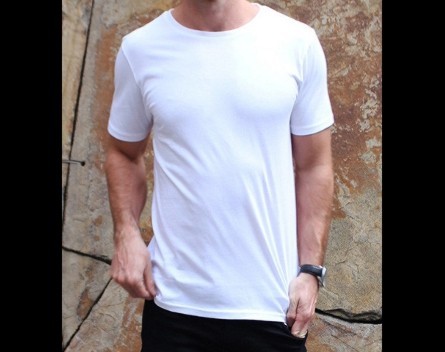 Scared of getting red wine on your crisp, white shirt?

You have nothing to worry about thanks to a Melbourne-based startup that is harnessing the power of nanotechnology in order to make water-repellent clothing.

Lewis Pitchford, co-founder of Threadsmiths, says while the technology has been around for a while it is the first time it has been used for commercially available clothing.

“Our vision is it’s the first all-natural hydrophobic clothing technology,” he says. “Essentially it’s a 100% cotton T-shirt at the moment that has a natural application that mimics the waterproof elements of a lotus leaf. It repels all water.”

In a YouTube demonstration, red wine is poured onto the T-shirt only for the fabric to remain stain-free and completely dry.

Pitchford says while the startup only sells T-shirts at the moment, he is open to branching out into other areas.

“At this stage it’s T-shirts, but we’re speaking to the manufacturer at the moment about getting all sorts of things in the sporting and hospitality industry like aprons, golfing apparel and chef whites.”

Pitchford, who works from an office in Fitzroy, has a co-founder currently based in LA. The pair started developing their idea last year in what Pitchford calls “a pretty quick turnaround”.

“The time difference is a little hard but we make do,” he says.

Although the business is in its early stages, the water-repellent technology has been patented. Pitchford says his advice to fellow entrepreneurs is to have a passion for what you are doing.

“If you believe in something put yourself out there,” he says. “That’s exactly what we’ve been doing. This is something we believe has great application for all types of industries and we really believe in the technology.”

The pair have been bootstrapping the project so far.

“Hopefully it’ll kick off with our own funding,” says Pitchford. “At the moment we haven’t really talked about anyone else investing but that’s something in the future we wouldn’t be opposed to.”

Pitchford says the startup has received a lot more media attention than he and his co-founder initially thought it would. He encourages other startups to use the media as a way of gauging how popular their product or service is.

“It’s been huge with radio interviews,” he says. “All sorts of blogs and media are really keen on it so that’s what we’ve been focusing our angle on to start. It’s paid off; it’s working really well.”

Threadsmiths’ water-repellent T-shirts are available in men’s and women’s sizes, with a kids’ version to be released soon.