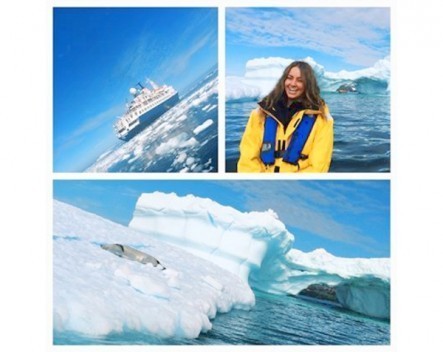 Stashd founder Jessica Wilson says part of being an entrepreneur means getting out of your comfort zone, but even for Wilson, plunging into the icy Antarctic Ocean meant going well beyond her limits.

“That really pushed me mentally and physically,” Wilson told SmartCompany, recalling the polar plunge she took in Antarctica just a week ago.

“If you can do something as extreme as polar plunge in Antarctica, then when it comes to something as low key as public speaking, suddenly it doesn’t seem so bad.”

The 23-year-old founder of tech fashion startup Stashd – an app that lets users ‘swipe’ to save their favourite clothes and accessories – was in Antarctica as part of The Unstoppables program.

Self-made millionaire Julio De Laffitte led the program’s inaugural expedition, which took a crew of 117 entrepreneurs to Antarctica to spend a total of 10 days exploring the area and discussing entrepreneurship.

“The Unstoppables’ whole mission is to support Australian entrepreneurs and bring them together, which is something I’m very passionate about,” Wilson says.

Wilson was one of only two tech startup entrepreneurs to be hand-picked for the cruise, getting the call just a month before the ship sailed.

“It was an amazing opportunity to go to a beautiful place with like-minded people – I couldn’t say no,” she says.

Each morning after a buffet breakfast, the crew would take part in a business seminar with “lots of talking” on a range of different topics, or go on an expedition to see different parts of Antarctica, including exploring penguin breeding grounds and the inside of a volcano.

“It is one of the most amazing places in the world, you would look out your bedroom window and literally see a whale and an iceberg,” Wilson says.

Wilson, who is set to make a funding announcement for Stashd in coming months, says she received plenty of business advice, including from De Laffitte himself, and made a range of connections for Stashd.

“I’m always up for something that supports the Australian entrepreneurial ecosystem and to take advantage of a chance to talk to ‘been there, done that’ investors,” she says.

And while Wilson appreciates not every entrepreneur can indulge in such an eye-opening experience, she says the larger lesson for her was to keep things in perspective.

“It’s nice to take time to just remember there are bigger things out there. I try to not have founder blinkers on and keep an open perspective and I think that’s the same for any entrepreneur,” she says.