You’re never too far from destitution even after huge success: Pandora founder 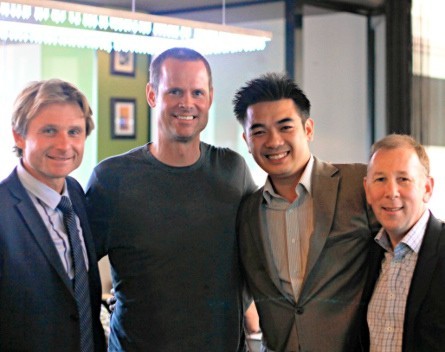 Pandora founder Tim Westergren tells the story of when he was being wooed by some high flying investment bankers who wanted to be involved in the company’s next raise.

Standing at a buffet table next to an opulent banquet of prime Wagyu beef, and with a glass of top-notch red wine in one hand, Westergren recalls picking up the beef slider and looking down at it when he had a vivid flashback.

He imagined that he was in fact holding a big mac in one hand and a soda in the other on a street corner in San Francisco, staring ahead at his credit card debt.

Westergren is in Australia for a flying visit to its Australian office, headed up by Jane Huxley, who says growth in the local market has been rapid.

Speaking at an Investor’s Org luncheon, wearing casual jeans, hiking boots and a grey T-shirt among a group of suited investors, Westergren’s story of struggling through adversity is certainly more dramatic – and genuine – than most.

In fact, what makes the Pandora story so compelling is not the enormous growth that the internet music streaming has had, but the depths of financial despair that it rose from, pulled through by the belief of a team that did not accept wages for two-and-a-half years (something they would later discover was illegal).

At his most desperate, Westergren, a musician until then, had maxed out credit cards, had $500,000 of personal debt and was being sued by some of his former employees. It certainly gives his flashback some context, and he says that feeling of destitution is never far away.

He had pitched 350 investors before Pandora got its first investment. It’s something he says in hindsight he would have spent less time on, “maybe pitching 250 investors instead”.

Westergren used about $2 million of that initial investment to pay back his employees. Calling them into a room, with a wad of cheques in his pocket, the employees had no idea they had received funding.

Westergren had purposely shielded them from the funding process, feeling that the emotional rollercoaster of chasing investment was his to bear. He didn’t want to raise their expectations only to have them crushed.

Pandora was born out of the music genome project. The initial technology was developed by Tim Glaser with musical input from Westergren.

It was an effort to “capture the essence of music at the fundamental level” using almost 400 attributes to describe songs and a complex mathematical algorithm to organise them.

While the team had no real business model, and was not being paid for their efforts for most of the time, Westergren says they all had a strong sense they were on to something magical.

It’s this belief from his team and the people he’s worked with that Westergren cherishes the most.

For him, the success he and the team have had was born out of their passion for what they were creating. Doing something you truly believe in is something he talks to many students about.

In September last year, the company filed a prospectus with the SEC to raise $230.8 million dollars through the sale of 10 million shares at a price of $23.99 per share. The offering dwarfed its $90 million IPO in 2011 by a factor of three.

As one investor at the event noted, “I can’t wait til I’ve made it big enough to not have to wear a suit ever again.”