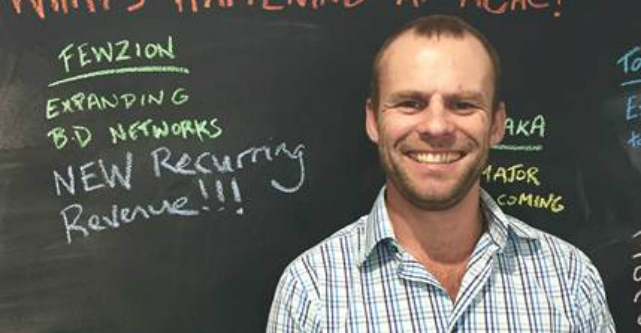 When Brisbane entrepreneur Paul Moynagh launched his software startup he could barely afford to buy Ramen let alone pay himself a decent wage.

Along with co-founder Alex Rezlaff, Moynagh says the going was tough at the beginning of the startup journey.

“It was a lot of not eating ourselves and a lot of paying ourselves very little but believing in it,” Moynagh tells StartupSmart.

But with just a bit of luck and a lot of belief, the pair has turned their Fewzion into a profitable and fast-growing management startup.

After spending more than a decade developing innovative solutions for mining, finance and manufacturing organisations, Moynagh says he started building Fewzion after spotting a common problem among their clients.

“They were struggling with a cluster of spreadsheets and whiteboards and random bits of paper,” he says.

“We’re all about managing frontline work and large blue-collar workforces.”

Now in its fourth year, Fewzion is generating about $60,000 to $70,000 in revenue per month with a team of just over 10 people, a far cry from its humble beginnings.

But the pair still have lofty ambitions to take on some of the biggest players in the workplace collaboration market.

“We’re trying to move toward the Atlassian or Salesforce land and expand sales model,” Moynagh says.

Having raised $570,000 from ACAC Innovation at the end of 2015, he says they’re now planning some key hires to facilitate further growth.

Before jumping into the CIO Summit Shark Tank to pitch Fewzion against fellow startups, he says they had actually been trying to avoid taking their ideas to CIO and CTOs.

While it’s a unique opportunity, Moynagh says their growth is more likely to come from the bottom-up approach of selling at site level.

Moynagh says he is also incredibly grateful to their first client AngloAmerican for giving their startup a chance.

He credits much of their success to this client’s backing from early on to roll out their product and develop the software.

“There’s no way we’d have the product we have without their support and they probably wouldn’t have been interested in us if weren’t actually helping to improve the way they perform,” he says.

Riding the bumpy startup ride, Moynagh says he thinks about failure all the time but is confident in their progress and how they’re running.

A lesson he has picked up along the way is when looking for investors it’s important to be very specific.

“Don’t kind of spray and pray,” he says.

Moynagh encourages startups to approach people directly who are within their industry, know it well and have an interest in startups.

“It’s just a heartache – a slow, draining waste of time.”