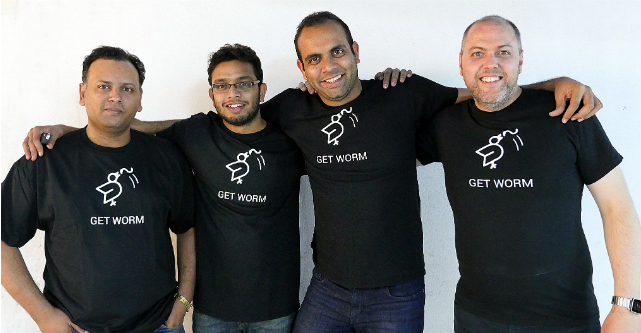 After attempts to launch a “LinkedIn for creatives” failed, Melbourne entrepreneur Sarthak Moghe was left pondering a simple problem.

“We kept building it for about nine months but we failed to get traction,” Moghe tells StartupSmart.

“How do we build validation from the get-go?”

This dilemma provided the inspiration for Moghe’s latest venture Get Worm, which aims to become the world’s largest platform connecting startups with early adopters.

“The big vision would be to build the number one community for people to discover things,” he says.

“Just as you would do a Google search to research something, if you want to be in the know with what’s new out there you would go to Get Worm.”

“We ate our own dog food in terms of we would only build it if they come, we didn’t build anything until we got validated,” he says.

They started with a launch page in February 2015, monitored its traction then rolled out a simple MVP.

Continuing to listen closely for feedback, they developed this into Get Worm.

Since its official launch in February this year, Get Worm has attracted more than 400 startups and nearly 2000 early adopters.

He also has lofty goals to grow the Get Worm community to more than 30,000 “users” worldwide.

Though Get Worm is free to use now, the team is planning to introduce a pay-per-conversion model where startups are charged a fee for each early adopter that signs up to them.

Unlike other review and testing platforms on the market like Product Hunt and Beta List, Moghe says Get Worm adds value by creating a public domain for early adopters to get rewarded, promoted and recognised for their support of the startup space.

“[Beta List and Product Hunt] have been running for a while and they have been quite successful in doing what they do but we just want to open that up,” he says.

“We have the incentivisation for the users, we’re not restricting startups in terms of where they are in their journey, plus it’s more around the [interaction between] startups and the users.”

How Get Worm works

On these campaigns, startups can offer their first 100 or 1000 users exclusive offers to try them out.

Users are then notified of these early bird offers through a system that links them to worm campaigns that match their specified interests.

Startups get detailed feedback and ad hoc comments on how to better their product or service including new ideas and constructive criticism.

They can also track engagement and conversion rates.

“The more important part than signups is getting feedback, to help them pivot and change their strategy,” Moghe says.

In return, founders can reward early adopters with a direct thank you or other ways of recognition.

This is fundamental in Moghe’s ultimate vision of connecting a community of like-minded people exploring new products and services with the startup world.

“When the startup is off-the-ground, these are the users who [will] envagelise their product or service,” he says

“Get Worm is a platform for startups and early adopters to get together.”