Meet the entrepreneur that raised $120,000 to create t-shirts that let you “wear your thoughts” 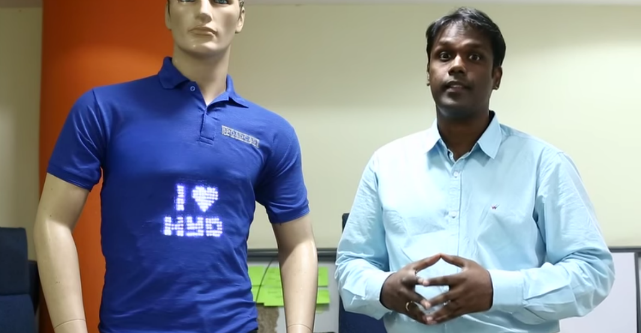 A tech entrepreneur in southern India has raised more than $US90,000 ($120,000) to create the world’s first touch-enabled broadcast t-shirt range.

Before creating his latest invention, he found an area that was ripe for disruption.

“When you look at any clothes, apart from the design of it nothing much has changed,” Nagubandi says.

“So what, we thought, can we change?”

What resulted was Broadcast Wear – clothing that enables consumers to “wear their thoughts”.

Starting with a t-shirt range, Broadcast Wear launched a crowdfunding campaign to raise $US25,000 to help manufacture and distribute touch-enabled, washable tops that connect to a mobile app.

“There’s an LED panel sandwiched between two layers of cloth and the LED panel is attached to a blue tooth chip,” Nagubandi says.

This is then connected to a mobile app, consumers can “broadcast” any message or image on their t-shirt.

It also means they can simply convert everyday clothing into a branded t-shirt for work.

And there’s an interactive gaming feature where users would be able to play games using the t-shirt as a screen, he says.

The development team is led by Nagubandi and his co-founder Mahalakshmi Nagubandi who combines a background in naturopathy and technology, firmware engineer Meghana Kancherla who wrote all the code for the shirt and hardware engineer Rajesh Venkatachalam.

With 10 days left, the team has nearly quadrupled their target.

“We didn’t expect it to cross so soon,” Nagubandi says.

As they near the end of their campaign, Nagubandi and his team are working fast to get Broadcast Wear ready for release.

“The startup scene in Hyderabad is pretty vibrant but from the hardware point of view there’s not much support,” he says.

“If we want a particular micro-controller, we don’t have stores like RadioShack, I can’t go to a store and buy it.

“What I’ll have to do is order online so it takes longer to build anything, even a prototype.”

Despite this, Nagubandi says they’ve been able to build multiple prototypes and is planning to get their t-shirts out to market from November this year.

“We want to produce lots in time for Christmas,” he says.

More than 1000 people around the world have signed up to get their hands on one.

“We’ve had a lot of interest from corporates [for] company t-shirts,” he says.

On the success of the crowdfunding campaign, Nagubandi says he has recruited a specialist crowdfunding agency in the UK.

“She has been coming up with different ideas to spread the word, we hardly used any advertisement,” he says.

One of their tactics was to run a flash sale every Monday where a discount reward would be added to the campaign.

Dropping the regular $US69 t-shirt offer to a two-for-one $US100 package has helped them boost sales every week the campaign has been active.

Looking into the future, Nagubandi is excited about where this is headed and has many ideas underway for the future of clothes and broadcast.

“We want to change the way people look at clothing, we’re doing a lot of things in [Broadcast Wear] and have lots more coming out,” he says.