Aquacultureman: Take a peek inside the land-based fish farm breeding 80% of Australia’s barramundi

Paul Harrison has a dream. He wants to feed the world with delicious, sustainably produced fish, and that’s just what he’s doing with MainStream Aquaculture.

Paul did a PhD in neurobiology, investigating the way that certain natural chemicals repel animals and how these could be developed into non-toxic paints for boats, but his future lay in bringing environmentally friendly fish farming techniques onto land.

His startup is now the world’s largest barramundi hatchery and a leading grower of the fish for the Australian hospitality and retail industry.

“The world has a problem around protein,” Paul Harrison told Duct Tape.

“The world population is growing, but one of the trends we look at, in addition to this growth, is how the nature of diets are changing.

“China is a perfect example. As the middle classes grow in China, people who traditionally largely ate rice and plant-based diets are now demanding more of a protein-based diet.

“So we have an increasing population, a shift towards more protein-based diets, and less land and natural resources to produce the protein. This is a recipe for a crisis, but it’s also why my co-founders and I originally thought land-based fish farming would be a good business.

“There’s going to be a shortage of protein and water. A business that allows you to grow a lot of protein without using a lot of water seemed like a sensible business, and I was young enough to think that if it seems sensible, just go with that.

“At MainStream Aquaculture, we provide barramundi as a food product to the world. Most of the fish we grow here, we sell in Australia. We supply juvenile seedstock to about 70 per cent of the Australian industry and 30 per cent of the world’s commercial barramundi farms. We also grow fish to market size to supply food service and retail outlets.

“So if you eat barramundi anywhere in Australia, four out of five of them will have started here in Werribee.

“We operate the world’s only commercial barramundi breeding program and pride ourselves on best-in-show stock. Our fish have been selectively bred since 2006 and perform up to 40 per cent better in farms than wild fish.

As a result, we maintain export customers of our fish in 25 different countries, last year we supplied just over 25 million fish worldwide for farming.

We actually just set a new record one-off sale for fingerlings. So that business continues to grow.

“We selected barramundi because we felt it had the most potential both at the market and in production. That was an idea we had 10 or 15 years ago, and over the last five years, that’s really come to fruition, where we’re seeing a number of countries all around the world taking up barramundi.

“More broadly our business is one where we’re focused on providing a high-quality fish product. We are very conscious and focused on the need for an efficient way to produce protein.

“The world has a real need for this and there are some interesting and exotic, next-step ways of growing protein being trialled, such as using insects to grow meat in petri dishes.” 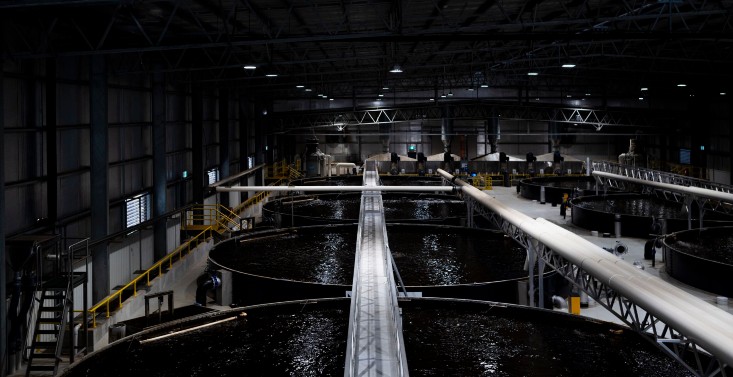 The search for white salmon

“The worldwide issue with fish is that we have good industrial supply for pink and red category fish, such as salmon and tuna. But we do not have an industrialised solution for white fish. That’s why when you go to different countries and cities you see a different kind of white fish — flathead in Melbourne, snapper in Sydney, and so on.

“Coles, Woolworths and the other retailers refer to a hypothetical fish called ‘white salmon’. They want a white salmon sitting in their window next to the red and pink offerings. In the USA or Middle East, it’s the same.

“Worldwide, we eat five times as much in the white fish category as the pink fish category, which is the next largest. So the category that’s most desired in the marketplace is the one that’s still the most heavily fished in the wild and aquaculture hasn’t solved that problem yet.

“We’ve deliberately positioned our business to address that void in the white fish category.

“Ten years ago, barramundi didn’t feature on the global stage, but now barramundi is often spoken about as the number one option to fill the industrialised or aquaculture-produced white fish void. We feel we’ve made an important contribution to that change, because we’re supplying domesticated fish to many countries now for farming.

“The governments and private companies within those countries have picked up that this is a great fish to grow and this is driving a lot of industry growth.”

“In terms of performance, the number one thing we have achieved is a better growth rate.

“Our fish are achieving market size about 40 per cent quicker than they used to 10 years ago. We’ve also selected for increased fillet yields — we’ve been able to reshape the barramundi to be rounder and not as long as wild barramundi. There’s no invasive genetics here. It’s simply a matter of selecting the fish that have those traits.

“We are now also actively selecting for market traits. A key focus area in our R&D department at the moment is the development of a golden barramundi.

“Barramundi are normally silver from the outside, but we’ve selectively bred a population that now appear gold on the outside because they’re not producing the melanin that gives the darker colour. The colour of normal barramundi, when prepared as a fillet, is slightly grey, but our golden barramundi have a perfectly white flesh fillet.

“You can obtain a better premium at market the whiter the fillet is, so we’re using our breeding program to develop traits that markets are asking for.”

“I did a double major in biology and physiology at Melbourne University and then went on to do a PhD at the University of New South Wales in neurobiology.

“The advice I got was to do a PhD in an area that would give me the opportunity to do either pure biology or medical research.

“At that point, I was already planning to start a business, but it was not clear whether my science career would be my primary or secondary pursuit.

“My doctoral research examined anti-fouling paints for boats. We were trying to understand how certain natural chemicals would be repulsive to the olfactory system of animals so we could develop nontoxic paints that would naturally repel them.

“During this time, I often discussed ideas for businesses with one of my supervisors, Rocky De Nys, who went on to become Professor of Aquaculture at James Cook University.

“We thought if we could get the location and the water right, the idea of intensive land-based aquaculture would work.”

“Rocky became a co-founder of our company. I also brought in my brother Michael, who joined the team and brought a suite of commercial acumen. The fourth co-founder, Mathew Mangan, is an engineer and a plumber that was my roommate during my PhD years in Sydney. So all of us had different skills.

“I had the overall idea and business plan, Rocky had the experience in aquaculture, Michael had a financial planning company and access to potential investors, and Matt had practical skills critical to be able to build something like this.

“My wife Holly can also lay claim to being a co-founder. We met when I was working in the USA, we got married and I convinced her that I had this great business idea. If she came back to Australia with me I promised a quick startup.

“But things never work as quickly as you hope and Holly ended up having to fund me for about two-and-a-half years as we were establishing the business. She even came up with the name ‘MainStream Aquaculture’. She had a separate career in medical research, but ended up taking some time off and helping MainStream with its R&D program. She successfully project-managed a multimillion-dollar project on developing the golden barramundi and was successful in co-funding this through a federal government grant. She has repeated this a few more times, so now works here and is well entrenched in the business as its R&D manager.

“My main insight has been that you have to have the right people around you. Entrepreneurial work is fun, but it can be lonely too. It takes a certain type of person to want to pave new ground, and when you’re trying, you often get told that your idea is no good.

“So many people tried to advise me to settle back to where it’s safe. You solve that challenge by having supportive and like-minded people around you.

“You can’t do everything yourself, so you need to find the right people who can help you, that break down that challenge.”

This article was first published in Duct Tape, a publication by Startup Victoria and Victoria University, and has been republished with permission.