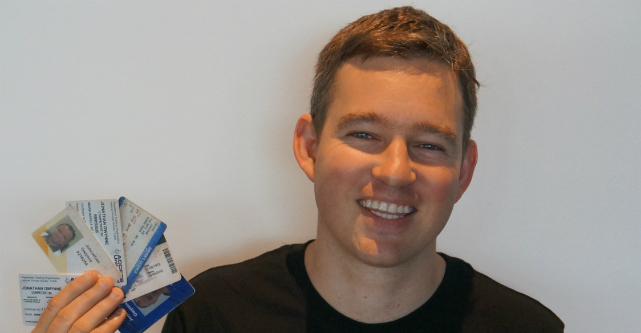 A Melbourne startup has launched an online platform giving Australia’s 3.8 million blue-collar workers a place to save and share tickets, cards and licences instantly.

CoverCard was developed when its co-founder and former boilermaker Jon Gwynne approached fellow founder Matt Tomlins with a nuisance he faced regularly.

Through more than 10 years working in mining, Gwynne had to carry around hard copies of his qualifications.

“I had noticed the inefficiency and difficulty in managing all my hard tickets, licenses and inductions,” Gwynne tells StartupSmart.

“I was also sick of filling out forms asking for very similar information every time I applied for a job.”

The problem is experienced by tradespeople around the country, from building construction and mining sites to residential jobs, who have to show valid qualifiers like induction cards, forklift driving licenses and the like to carry out their work.

“[Gwynne] wanted to do a smart card which is a fantastic idea but quite a challenge in practice so that got me thinking about what else you could do,” Tomlins tells StartupSmart.

Tomlins says the idea for CoverCard is simple – it just digitizes information but the opportunity from this is far greater.

“There are literally hundreds and hundreds of these things and they’re almost all in hard copy format,” Tomlins says.

He points to the example of 1Form, which changed how renters apply for residential properties.

“You enter your details once and you can send it many times, that’s part of our thinking with CoverCard,” Tomlins says .

The platform matches blue-collar workers and employers based on qualifiers.

On one end, workers can use CoverCard for free to create professional profiles with current qualifications, which they can use to job search, share with employers and get instant alerts when they match with an opportunity.

The mobile-friendly app is integrated with Facebook and LinkedIn, enabling workers to leverage existing networks.

On the other end, employers can pay a fee to list a job and filter candidates based on matching tickets, licenses and qualifications.

Tomlins says employers can save up to 90% of the time it takes to filter through hundreds of resumes by simply clicking the “matching candidates only” button.

“Where we are completely unique to anyone else in this market is that workers and employers select from the same central database of tickets and licences that we’ve created,” he says.

“It means that when we are capturing that data, it’s a lot easier to filter, to match, to deal with employers and training providers.”

Since launching about two months ago, Tomlins says CoverCard has been gaining strong traction among blue-collar workers, with a few hundred registered already.

They have also been backed by digital agency Loud & Clear, which invested in successful Melbourne startup Sidekicker, and have brought on Fire and Safety Australia as a training partner.

Tomlins and his team are now working to scale their user-base and traction through more strategic partners.

“Ultimately we’re aiming to liberate all the data that workers carry around in hard copy with them everyday and make it usable and valuable to all,” Tomlins says.

“We really want to make sure that we offer value to workers – we feel they’ve been a little bit neglected in existing recruitment processes.”