Aussie startup MilestonePay is undergoing a renovation. But rather than being stripped back and rebuilt behind closed doors, its makeover will be very public, with founders Ryan Handby and James Claridge opting to live stream the whole thing, warts and all.

To add an extra challenge, the founders have set themselves 30 days for the task.

Founded in 2017, MilestonePay started out as a contract management tool for freelancers and agencies, designed to help people get paid on time.

Things were going well, but as the startup onboarded more customers, they started asking for additional features and use cases, and the team were only too happy to oblige.

However these add-ons started to become messy.

“We realised we had to do a bit of a feature halt to make sure we were steadying the ship in the right direction,” Handby tells SmartCompany.

The founders focused on four or five main features, and stopped creating more, focusing instead on marketing efforts and collecting user feedback.

They ended up with a pretty clear idea of what they could add, and what could be restructured in the business “to turn it into a more interesting product for people and solve the problem even better than we originally set out to”, Handby explains.

Now the founders are redesigning the business to provide a toolkit for supporting the full freelance process, from first contact with a new client to final project payment.

That will include tools for client management, forms, contracts, invoicing and payments, plus new features for building proposals, time tracking and automating workflows.

As of last week, the MilestonePay team has been live streaming the rebuild on Facebook, Instagram and Twitch. The streams include daily project update sessions and evening wrap-ups, as well as live ‘ask me anything’ sessions.

Sometimes viewers can simply tune in to watch coders code. 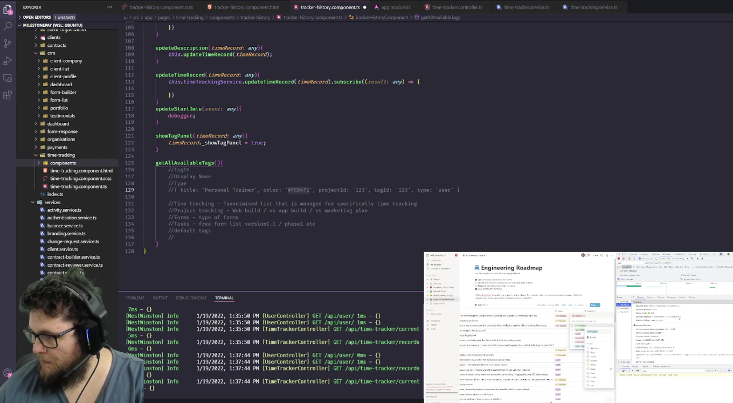 The idea, Handby explains, is to shed some light on the actual work that goes on behind the scenes at a startup, showing that the ‘hustle’ is not as glamorous as it might sometimes seem.

It’s about showing solidarity with other founders, he adds. He wants to show that it’s okay to share the harder parts of running a business, too, rather than only sharing when you have a new product or a big win to shout about.

“There aren’t enough startups out there visibly grinding,” Handby says.

“You don’t usually see the rough parts — the hairy edges.”

The founders also saw an opportunity to continue to engage with both MilestonePay’s community of users and with the broader startup community. They hope to learn through the conversations they have over the 30 days, and to impart some knowledge too.

Of course there’s also a promotional side to this. As long as the team can avoid a catastrophic server explosion or any other public disaster, any additional attention can only be a good thing.

“Hopefully we get some more people interested in our product,” Handby says.

Car Next Door founder Will Davies reflects on his startup journey, from Shark Tank to a successful acquisition.

The startup offers grocery delivery within 10 minutes, and has secured backing from Tiger Global Management, Airtree and the co-founders of Atlassian.

Thanks for sharing our story! If you want to follow the rebuild you can get the links to all of our socials + Twitch stream at https://social.milestonepay.com/30-day-rebuild