How Seabin’s viral video campaign led to $5 million in sales, and an equity crowdfunding raise

Back in 2016, Aussie startup Seabin raised just shy of $400,000 on Indiegogo. Three years and a viral video campaign later, it has $5 million worth of Seabins in operation, in 52 countries, and the company is launching an equity crowdfunding campaign to fund its next phase of growth.

Founded by Pete Ceglinski and Andrew Turton, Seabin essentially does what it says on the tin — it’s a rubbish bin that sits in the ocean, filtering seawater and siphoning out plastics and other pollution.

Water is sucked in on the surface into a mesh ‘catch bag’ that collects floating debris. It’s then pumped back out.

In case you’re wondering, as the focus is on catching trash that’s floating on the surface, we’re assured it’s pretty rare that a fish gets caught up in the mix.

The 2016 funding fuelled an R&D drive, and by 2018 the co-founders had the first commercial Seabin product on the market, Ceglinski tells StartupSmart.

Within less than two years, the startup put 680 products in place across 52 countries, worth a total value of about $5 million, he says. The business is now operating in the black, purely through sales.

But it’s time for a new phase of growth for Seabin; Ceglinski and the team have launched an equity crowdfunding campaign via Birchal in a bid to raise up to $3 million.

This may be a profit-for-purpose business, but it’s a business nonetheless.

“We have to keep our business heads on — we need to pay the bills,” Ceglinski says.

“The longer we take to get out there and scale up, the more opportunity there is for others to do the same thing.”

Raising capital through an equity crowdfunding campaign allows the startup to bring in community investment. It offers Seabin’s supporters the opportunity to play a role in the future success of the business, and hopefully benefit from it later.

“The more people we can get involved and give financial incentives to support us … the more impact we can make and the more credibility we can have with our future clients.”

The funding is earmarked for investment in the Seabin team, including key hires in global sales and marketing, and in investing in the technology itself.

But the startup will also be investing in creating a new product offering, targeted more specifically to city councils and governments to allow them to access a fleet of Seabins on a lease basis.

“They don’t want to own anything, but they want full services and they want to lease things for a period of time,” Ceglinski explains.

For the local governments, it’s less of a commitment and less bureaucracy. For Seabin, it creates a recurring revenue stream.

“It’s not just the sale of the Seabin anymore, it’s also the sale of labour, manpower, contractors, maintenance, servicing, which really pushes our gross profit quite a bit.”

Thus far, Seabin has grown mainly through forming strategic partnerships with ports, marinas and yacht clubs around the world, focusing upstream at the source of the problem, rather than in the open ocean. 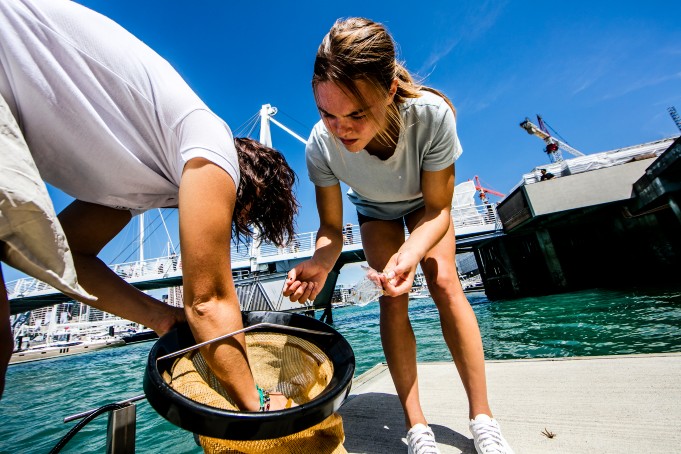 A Seabin being emptied. Source: supplied.

Both founders are surfers and sailors. They’ve spent their lives on the ocean, and they know it well.

“The ocean and the saltwater … is quite a hostile environment.” Ceglinski says.

“I stopped counting, across the different platforms, when we got to about 800 million views … the video went proper viral.”

The video served to put the Seabin brand on the radar of potential clients and the startup was quickly inundated with enquiries.

“From there, it was trying to filter out who would purchase the technology.”

Ultimately, Ceglinski found himself living every founder’s dream. The biggest challenge he was facing wasn’t building the technology or trying to get it into the market.

“The greatest challenge was to satisfy demand.”

So, how exactly does one create a viral video campaign to launch their fledgling business to global success?

For Seabin, “the trick was that there was no trick”, Ceglinski explains.

“Our strategy was just to be real, not trying to be anything other than what we are in our mission.”

It helped, he said, that the Seabin was a type of product no one had ever seen before. In fact, the co-founders had a heated discussion with their video editor, who wanted to make the production about the founders and their personal journey.

That wasn’t what was interesting, Ceglinski says.

“We needed to tell the story of something no one has ever seen before,” he explains.

“We had one massive asset — that nobody had seen a garbage bin crossed with a pool skimmer put in the water before.”

The team also made a point of keeping the content positive; there were no sad-looking turtles in the content, and not a garbage island in sight.

Ceglinski explains he didn’t want Seabin to be perceived as “bible-bashing”, or preaching to people about what they should care about, or why. Rather, he wanted to showcase what the tech could do.

“We focused on the outcome of our actions … when you remove pollution, it’s that one little bit cleaner.”

Of course, there was also an element of good timing. The environment, and particularly ocean plastics, is prevalent in the public consciousness, and people were, and still are, looking for ways to do something about it.

“It was the right time, right place, right product, and the right mentality,” Ceglinski says.

“How much can you keep talking about something, before you start to do something?”

At the same time, the video also focused on the other things the startup was doing to tackle waste, building a community around those efforts. The team chose to focus 50/50 on the for-profit business, and other not-for-profit activities.

Seabin in the community. Source: supplied.

It was a case of perception, Ceglinski explains. He’s aware taking plastics out of the ocean won’t solve the problem of how it ends up there in the first place.

“We didn’t know that would happen. We just knew that if we did that we wouldn’t be perceived as hypocrites by telling someone Seabins are going to save the world, when in reality the real solution is education,” he says.

“Three years later, we started to see a return on investment through community-driven demand.”

But, finally, the true secret to Seabin’s success so far hasn’t been viral video campaigns, building communities or a compelling founder story. The biggest element of success, according to Ceglinski, is the quality of the product itself.

“Even if we screwed up the messaging or the marketing or something, we could still fall back on the fact we have an amazing product that works, and it has a measurable impact,” he says.

“We are very fortunate that this product enables everyone a better value of life; it’s not just putting money in my pocket. That’s a major driver in why we’re here today.”