Child prodigy to startup chief: How Chris Brycki turned his passion for stocks into an investment tool for everyday Aussies

Having made his first faux investment before he started high school, Stockspot founder Chris Brycki discovered he had a head, and an insatiable appetite, for the stock market.

Now, not only has he turned this passion into a career, he’s putting it to use to help other Aussies invest easily, and wisely.

It was designed as an alternative to traditional fund managers and advisors that charge excessive fees for stock market advice, without necessarily delivering the best returns.

Now, the startup has raised more than $8 million in equity funding, and has seen revenues double year-on-year.

It manages hundreds of millions of dollars for thousands of customers, with client returns ranging from 16.4% — for the more conservative portfolios — to 21.7% for the high-growth portfolios.

Brycki’s passion for all things listed came about when he was about nine years old, he says. With the air of one telling a well-worn family tale, he tells StartupSmart how his father gave him the paper, and told him to pick a company to invest in.

He chose a mining company, and dutifully kept track of it over time, watching the numbers move in the right direction.

“That opened my eyes to the world of investing and how incredible it was that, as a regular Aussie, you could own a part of a business and share in its success over time,” he says.

After a few weeks, the young Brycki had made $200 on his $1,000 investment and asked to cash out and claim his profits.

As it happened, his father hadn’t counted on him doing quite so well, and had never invested the cash in the first place. It was all just an exercise, Brycki sighs.

But the seed was well and truly sown, and Brycki started spending his weekends researching the stock market, and started entering — and winning — stock market competitions.

“That just gave me a bit of a leg up to get a great starting opportunity in the industry,” he says. 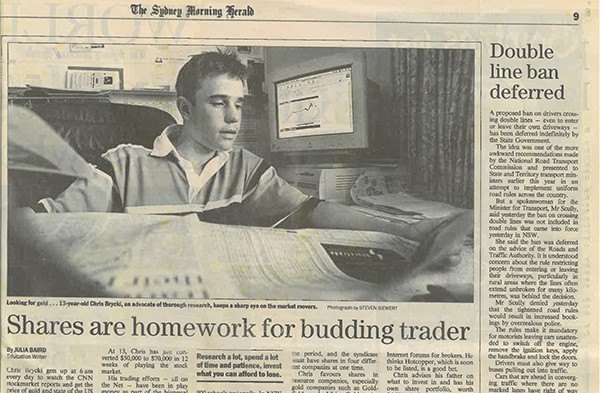 Straight after graduating, he joined UBS as a portfolio advisor — and soon identified a disconnect between how consumers thought about investing in stocks and the reality of the industry.

People tend to think they need an (expensive) financial advisor or stockbroker to manage their investments in order to get good returns, he explains.

“The reality couldn’t be more different,” he says.

“Anyone should be able to invest with a small amount of money and very little knowledge, and do as well as the professionals out there.

Stockspot was on the early end of the fintech revolution in Australia. And, Brycki says the nation has been late in waking up to the opportunities fintech can bring for consumers.

The financial crisis of 2008 hit harder in other markets such as the UK and the US, where a lot of customers realised their banks didn’t necessarily have their best interests at heart.

Equally, the people working at those banks left or were made redundant, and got the opportunity to experiment and try their hand at entrepreneurship.

When he left UBS to launch a startup, most people in his industry were “very gainfully and happily employed at big banks”, he notes.

“There wasn’t a lot of motivation to leave those banks, because when you start a business like I did you basically go to zero salary. It’s pretty risky.”

But, over the past three or four years, things have started to change. The banking royal commission has opened more people’s eyes to the problems of having four or five dominant players in financial services, and we’ve seen a subsequent boom in fintech startups.

We have also seen a change in public perception. As the public loses trust in the big four, people are becoming more open to the idea of tech companies managing their money.

“There’s a big reluctance to make any change. You really need a bit of impetus to really drive people to make a change.”

One thing Brycki focused on when he first launched Stockspot was making the onboarding process as seamless and smooth as possible, and entirely online. Now, with so many neobanks offering entirely remote signups, this might not seem so revolutionary.

But, in 2013, “there was literally not a single financial product I could find out there that you could apply for and invest your money in, that you could do online”, Brycki says.

“There was no way to get any consumers to adopt any sort of fintech product unless you could solve for that friction,” he adds.

While Stockspot is a success story now, Brycki admits moving from a cushty corporate lifestyle to the life of a startup founder was both liberating and daunting.

“Working in a big organisation, I became a bit frustrated with how difficult it was to get things done,” he says.

“There’s a lot of red tape, and there’s also a lot of people who are motivated in different ways to you.”

When he struck out on his own, he was able to set his own agenda, he says.

But, there were downsides too. You don’t have those other people to help you, either.

“One of the biggest challenges is having to learn to be all those people,” Brycki says.

But there are a few things new founders can do, or traps they can avoid, to set themselves up for a good start.

“When you start a business, it’s quite normal to think that your idea is the thing that you don’t want anyone to find out about, because if they do, they’re going to steal it and they’re going to build the business you dreamed of building,” Brycki explains.

“That’s a real fallacy. It just doesn’t happen like that.”

By talking about your idea, founders get the benefit of feedback. But perhaps, more importantly, they can also start to win over early advocates of the business — potential customers, employees or even investors.

“Without actually sharing your idea and passion, there’s no way you’re going to win any of those people over,” Brycki said.

Secondly, Brycki says there’s a common misconception among founders “that the first version of their product needs to look really schmick”.

People can think that if they launch on day one with a beautifully refined product, they will automatically be inundated with customers. That’s not how it works, Brycki says.

“The first version of your product just needs to solve a real customer problem, and if it solves a problem, your first customers will accept that it doesn’t look perfect.”

Then, it’s a case of winning over customers individually. Stockspot’s first 30 or 35 customers were people the founder knew, he explains.

“At the start, they were the only people who trusted me.”

It was when that number started to grow, and when he started seeing names he didn’t recognise, that he knew the idea was good enough.

“You can’t ever expect that you’re going to have a big launch where a lot of people are going to discover your product and use it straight away,” Brycki says.

“You really need to put a lot of effort into selling your message, getting your product out there and winning those customers one by one.”

NOW READ: “We have a lot to lose”: New fintech minister is a welcome nod to profitable startup sector, but there’s more to be done