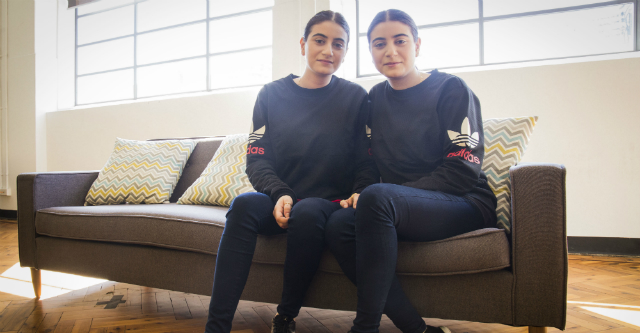 Two Sydney twins have captured the imagination of half a million people with an app that lets anyone turn themselves into an emoji.

Moji Edit founders Colina and Hripsime Demirdijan, aged 24, have no background in tech development and are still at university, but their app has already racked up millions of users in just weeks, becoming one of the most popular free products on the Apple App Store in the US, UK, Canada, Iceland, Ireland and Australia.

“Moji Edit is an app that allows you to express your personality and identity literally,” the twins tell StartupSmart.

The app is free to download but it generates revenue through in-app purchases ranging from $2 to $7.

“We’re really humbled and startled by our quick success,” the twins say.

From finishing each other’s sentences to completing matching Bachelor in Law degrees, the sisters do almost everything together, so becoming business partners was just a natural progression, they say.

“We’ve always been entrepreneurial and we’ve always wanted to partner up and do something together,” the twins say.

“It has been such a blessing being able to share the journey with each other.”

The idea for Moji Edit came when the twins spotted a gap in a fast growing market.

“We saw that emojis are becoming very popular and we noticed that there’s no way to create your own custom ones,” they say.

“That’s what has really driven and given us success so far, filling in that gap.”

“We’d really like to be the leading source of custom and personalised emojis in the market,” they say.

“We’re hoping to collaborate and create partnerships with people and creative companies who can add value to the Moji Edit experience.”

Tech entrepreneurs with no technical skills

From their experience, the twins are hoping to set an example for others – especially young women – that they don’t need to come from a technical background to become entrepreneurs in this space.

“We didn’t want to just develop something had been done before, we wanted to enrich people lives and introduce something that would add value, that users would engage with.”

To help them, the twins put a lot of effort into building a network of people around them who have experience in the sector.

“It’s really about understanding not just how to do an app right but finding the right support team,” they say.

After setting up their business plan, the twins went out and found experienced developers who share their vision and creativity.

“Finding the right team can bring your project to life,” they say.

They say this helped them navigate through some of the complicated parts of getting an app into market.

“We had to understand what could be done technically and with some of the features we want sometimes it’s technically impossible because Apple has it rules and requirements,” they say.

The duo also did market and consumer research to help them design a product to meet their users’ needs, and they continue to regularly update their fast rising user-base as Moji Edit progresses.

“We really focus on listening to our users,” they say.

“We’re going out there, finding out what the market want, implementing those features and making the on-boarding of users easy.”

The Demirdijans say that anyone can enter the tech startup sector if they have the right attitude and a determined mindset.

“Believe in yourself and support your ideas,” they say.

“It’s good to always take a risk, you never know where the road may lead you.”