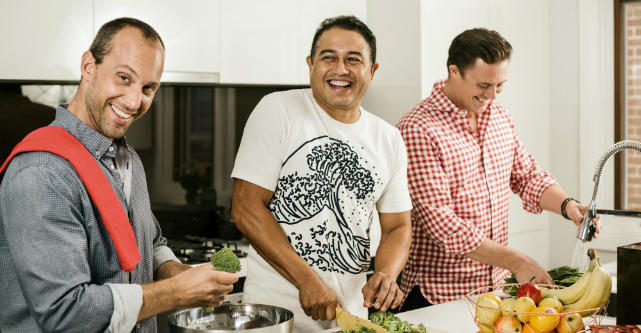 Fans of reality cooking shows like My Kitchen Rules and MasterChef who have hidden culinary talents of their own now have a platform to share these with the public thanks to Sydney startup.

Founded by entrepreneurs Johan Schyberg, Nelson Hidalgo and John Welander, WelcomeOver helps cooking enthusiasts convert their homes into pop-up restaurants, allowing them to offer dine-out experiences without having to actually own a restaurant.

“The concept is not new – it has been around the world for a long time but the platform to connect them has been missing in Australia.”

WelcomeOver lets users set up personal accounts as a guest or host.

Hosts then create in-home culinary experiences and invite groups to try their meals for a monetary “contribution”.

“You can sign-up and register as a host, say what you’re planning on cooking, what dates and how much you’d like them to contribute to dinner,” Schyberg says.

It’s the ultimate social network for those who dream of owning their own restaurant, he says.

“You can test out your culinary skills and make a bit of money on the side,” he says.

Focusing on the big markets

The beta site can now be accessed anywhere in Australia but Schyberg and his team are focusing on the Sydney and Melbourne markets first.

“It’s very easy to use the platform now as a guest, when you find something you like you just book it for that date,” he says.

So far, the site has 14 registered hosts across Sydney offering a range of culinary experiences including ‘Arepas in Bondi’, ‘Mexican Markets’ and ‘Singapore Hindian Food’.

From complementary sparkling to “highly interesting conversations”, each host adds their own personal touches, Schyberg says.

For quality assurance, the WelcomeOver team is making an active effort to visit each Sydney-based host in person.

“We have a fairly large number of potential hosts pending approval,” Schyberg says.

As they expand across Australia, he says they will look at bringing on quality assurance ambassadors to help them with this process.

Every host is also screened with a police check and guests can score their host on the quality of the dining experience, which is displayed through a public ratings system.

Where ratings are notably low, Schyberg says they will be investigated.

The idea for WelcomeOver came after Schyberg discovered an online platform in Asia where people could share different services like hiring guides and drivers.

“They also had home-cooked meals so we took that little part out of it,” he says.

With Australia demonstrating a strong appetite for new and creative culinary experiences, Schyberg and his fellow co-founders decided to start building the platform.

“This is our first startup – it’s a rollercoaster,” he says.

“It has taken us over a year to develop the platform and test it.”

While they’ve had their bumps and knocks along the way, Schyberg says he is happy to finally see their product out in the market.

“I’m very grateful [that] it’s all come together, that being said – no time to relax,” he says.

As they work to build the WelcomeOver community, Schyberg and the team will later add a commission on the host contribution fee.

He says this will be pre-calculated on listings so the price on the site is all the guest will pay.

With hopes of WelcomeOver becoming a household name, Schyberg and his team are now focusing efforts on achieving critical mass in Sydney and Melbourne before actively rolling out across Australia and, eventually, the world.

“We want to be the name associated with this type of dining experience similar to Airbnb and Uber for their respective services,” Schyberg says.