‘The future of motoring’: Why a former bank worker decided to launch a limo service for Teslas 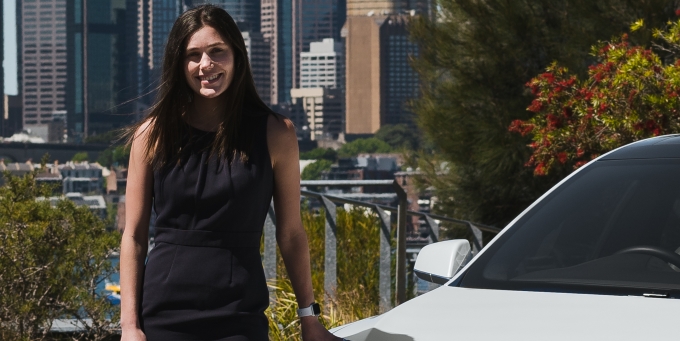 After sitting in the passenger seat of a Tesla Model S five years ago, Pia Peterson had somewhat of an epiphany.

“As soon as I sat in that car and the Tesla employee drove me around, I instantly knew this was the future of motoring. This is where cars were going,” she tells StartupSmart.

The Westpac employee at the time was in the process of ordering a Model S for herself and her husband, but after being dropped off found herself looking at what sort of sustainable transport options were available in Australia from a services standpoint.

This led to the corporate worker making her first-ever jump into the world of startups, launching Tesla chauffeuring service Evoke midway through 2015.

Despite Tesla’s being both notoriously expensive and notoriously difficult to get your hands on, Peterson says neither of those issues were the most pressing for her in Evoke’s early days. Instead, her “biggest hurdle” was diving headfirst into an industry she knew nothing about.

“I was new to the industry, and I’d never managed a transport company before, and I didn’t know much about the space. I’d spoken to and gotten advice from a few people but speaking and doing were two quite different things,” she says.

“I was coming to terms with how to fit all the different pieces together, how we could run driver shifts, all those sorts of things.”

Today, those troubles are far behind the founder, as the company has eight cars operating in Sydney and another four in Melbourne. She says Brisbane is next on her to-do list, with the company’s expansion being helped by it being able to see how its customers travel.

“We knew launching in Melbourne would work because we were guaranteed trips to and from the airport. The typical user would travel from home to the airport, from the airport on the other side to their office, and then do the whole trip back again,” she says.

Those customers are largely corporate, something Peterson says she always knew would be Evoke’s target market, but the founder has been surprised by the reason corporate customers have sought out her service.

“When we started, I thought we’d see most customers come to us for sustainability reasons, but that’s not the case,” she says.

“They’re choosing us for our reliability over anything else, and the sustainability reason is actually coming in lower down the list. I think it’s usually viewed as something that’s just ‘nice to have’.”

“We have a 99.5% performance rating, so we promote that quite highly now.”

Along with corporate customers, Peterson says Evoke also fields the odd request from parents, whose kids have asked them for a ride in a Tesla for their birthday or other events.

“I feel like kids know more about Teslas than their parents do,” she laughs.

Electric vehicle policy has dominated much of the early campaign cycle for the upcoming election, and Peterson doesn’t shy away from labelling some of the inaccurate claims made by political parties as “complete BS”.

“There’s been a lot of noise about what EVs can and can’t do, such as towing and such, and it’s complete BS, it’s not true. It just leaves the people who do own EVs to do a lot of correcting,” she says.

Broadly, Peterson welcomes the discussion from politicians about electric vehicle policy but says it’s not something she’s been keeping a close eye on. She says any policies which increase the uptake of EVs while decreasing the cost is welcome in her eyes but says Australia is undoubtedly “lagging behind”.

Evoke runs a unique role in matching a fast-growing and futuristic industry with one which is perceivably on the out, as players such as Uber and Lyft snatch significant business away from chauffeurs and private drivers.

But Peterson is sanguine about the future of the industry, noting despite the constant ongoing discussion about autonomy and ridesharing, high-end chauffeur services will always have a place.

“Uber has a predominant focus on the lower end of the market, but at the higher end, people will still want someone to greet them as they hop off their plan, take them to their car and manage their luggage,” she says.

“There’s always going to be scenarios where we need the human element, and people are still happy to pay a premium for that.”