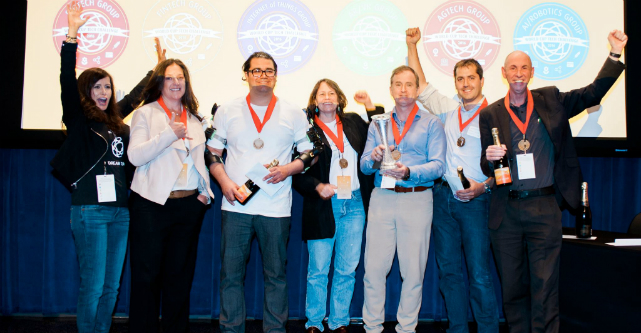 When Perth entrepreneur Graeme Speak strode down the aisle at one of Silicon Valley’s biggest pitching competitions, the Australian national anthem was playing and he was feeling confident.

Despite having only slept three hours across the last two nights, Speak had practiced his pitch tirelessly and knew it inside-out.

As he strode onto stage the lights came down, a spotlight centred on him and Graeme Speak froze.

“I got on stage and had a total blank out – what was the first line?” Speak tells StartupSmart.

“I was completely lost and that rattled me. The first 60 seconds are so crucial – you need to establish credibility and nail what the problem is.

“There was a lot of tension – a lot was at stake.”

It was at the finals of the Silicon Valley World Cup in Tech competition at Microsoft’s Silicon Valley headquarters. Billing itself as the “most exciting startup competition of the year”, only 24 startups had been selected to pitch and Speak’s startup, bank account security software BankVault, was the only Australian company on show.

While on stage, in the spotlight, Speak felt like he was frozen in time.

“You just can’t believe it,” he says.

“There are 200 people looking at you. They’re all quiet, the lights were shining on me and I’m not used to that – I’m not a performer.

“There was so much at stake.”

He thought about all the work he’d done on the startup over the last 20 years, everything he’d given up for it and the near-one thousand Australians that had voted for him in the company.

This helped Speak to eventually clear his mind and get going with his five-minute pitch to an audience of high profile entrepreneurs and investors.

“I had a memory system and I went back to that and found my pace,” he says.

He quickly detailed the technology that BankVault offers and its evolution across two decades.

“We pivoted the technology we were building over this time. Eighteen months ago we moved to solve a cyber-security problem and ran into this multibillion dollar market.”

BankVault’s platform connects smartphones and computers to a virtual desktop session that lets users conduct their online banking in an emulated environment operating outside of their device, with all the data disappearing immediately along with the session.

“Fintech startups in the US had $20 billion of VC funding last year and cyber-security had $3.3 billion of VC,” he says.

“It’s just massive and we’re at the intersection of both. We think it’s a multibillion-dollar opportunity for us.”

Speak finished his pitch as confidently as he had strode down the aisle only five minutes earlier, and quickly turned to face an imposing panel of judges and their questions.

“They fire questions at you and that’s your chance to really shine,” he says.

“One of the guys was smiling and kept nodding at me, that was when I thought I’d nailed it.”

Speak, who has been a member of the group running the competition for eight years, says he already felt like a winner just from qualifying for the finals, and hadn’t even contemplated winning the whole thing.

“You just don’t know if you’re going to win it, and we felt like we’d won already just by getting to the top 24,” he says.

The emotions boil over

But that wasn’t the only acknowledgement BankVault and speak would receive. Later that night, the lights dimmer again and the announcer revealed the winner of the fintech category: “Australia.”

It was then that all the tension, nerves and adrenaline left Speak, replaced with raw emotion.

“I’ve dedicated so much of my life and energy into this,” he says.

“It sucks all of you in completely: your reputation, your future, your family and your livelihood. I’m Australian at heart.

“It was very emotional. You don’t realise that until the tension has gone.

“We always were doing something important and credible, and something with consequence.”

Along with the validation and plaudits, Speak says he has already been introduced to some “really serious” investors in Silicon Valley as a result of the competition.

He says he’s looking to raise funding for BankVault but wants to look internally in Australia first.

“The goal right now is to raise a bit more money over the next 10 days then basically leverage that into some large channel partners.”

For Speak and his dedicated team, all the hard work is beginning to pay off.

“I’m so proud of what my team has created. It’s such an amazing technology.

“We can now go global and expand the business exponentially.”

He says it’s also a lesson in the importance of putting yourself out there as an entrepreneur and getting on the front foot.

“It’s really important for people to get out and get actively engaged and known,” Speak says

“People think they can just have an idea and the world will come to them. But it only comes to you when you earn credibility in the community.

“I give a lot of my time to the community to help other people. That’s how people get to know you, get to like you and where your base of support will come from.”

Above all, Speak’s difficult 20-year journey proves that persistence is the most important part of being an entrepreneur.

“Unless you are completely committed you’ll hit the ceiling and stop,” he says.

“If you’re committed you’ll keep hitting your head and eventually break through. I’ve broken through plenty of ceilings and there’s nothing special about me except that I’m tenacious.

“You just can’t give up. You have to keep going.”