The next generation of Australian founders: How a Year 11 student and his friends turned a school assignment into a startup 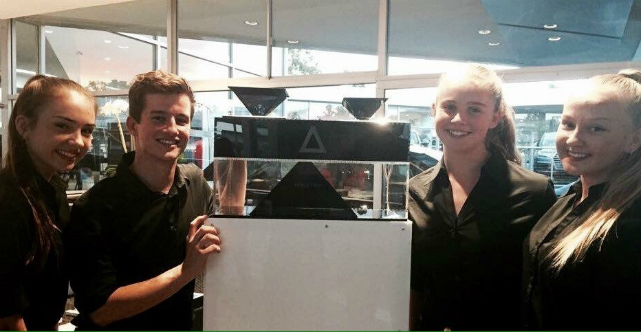 A Brisbane high school student has turned a homework assignment into a thriving tech business that has already attracted customers around the world.

Along with a bunch of school friends, Year 11 student Scott Millar has launched BOP Industries, and says he wants to prove that young people can start and run their own businesses and that they should be taken seriously.

“We encourage other young entrepreneurs, if they’ve got an idea to go and try,” Millar tells StartupSmart.

“You’re never too young or too old to start a business.

“You will reap the rewards if you work hard.”

Millar says the mission of BOP Industries is to learn about bleeding edge technology being created in cities like Silicon Valley and make it more affordable and accessible for people in towns like his.

It started as a Year 9 “business venture” project, where students were given the opportunity to develop business plans and pitch for a $100 investment.

After the strong uptake of their first product,a hashtag key-ring, Millar and his team have moved to a new product – a hologram display device.

“We thought wouldn’t it be cool if we could do this full-time,” he says.

But entrepreneurship isn’t something Millar has always dreamed of.

“Initially, I was really into the arts and I loved performing,” he says.

But when he started to learn about business and saw the possibilities, something clicked.

“There was something addictive about the whole startup culture,” Millar says.

In the classroom, Millar and his team learnt about price points, market research and ways to sell a product.

They then used $2000 mostly generated from key-ring sales to develop their latest product, a low-cost hologram device that can be used at events like product launches.

He says they have sold hundreds of products to customers around the world, using platforms like Etsy and eBay.

“We’re always reinvesting money back into the business,” Millar says.

The team is also in talks with businesses wanting to use the hologram device at expos and other events, and are working on bringing it into the classroom.

“We’ve been really fortunate to get connected with [co-working community] Little Tokyo Two,” he says.

“They’ve all been really helpful with mentoring us through the process.”

The young entrepreneur says that one of the best lessons he’s taken away so far is to try to meet five new people every week.

“Hearing others’ story and hearing about what they do is really inspirational for us and it also give us new opportunities for the business,” Millar says.

With a big vision of making cutting-edge technology more affordable and accessible to people around the world, Millar says he also wants to continue inspiring his peers about the possibilities of entrepreneurship.

“We can do more than just have part-time jobs, we are learning awesome things at school,” he says.

“It also shows that we can make a difference.”