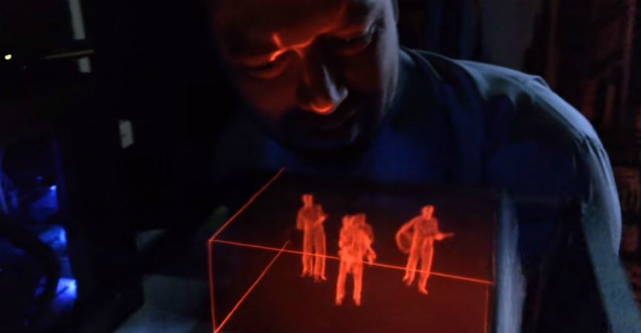 After years of experimenting in a shed with bits and pieces collected from hard rubbish, two Adelaide inventors have a high-tech device letting anyone experience 3D hologram visuals without needing special glasses.

Entrepreneurs Gavin Smith and Will Tamblyn worked together for nearly a decade before creating the device.

“Will and I used to have a Thursday night lab session, which was effectively hanging around in his shed and making things,” Smith tells StartupSmart.

And they only abided by one simple rule: “The crazier the idea the better.”

And the mantra paid off with the creation of Voxiebox, a hardware device that lets users experience 3D visuals in high definition through a hologram.

“After many years of messing around with lasers and projectors and all sorts of different optical components, we created something which was really cool looking,” Tamblyn says.

Teaming up instead of competing

But three years ago the duo realised a group in the US were creating something very similar.

“We actually saw their video and thought, ‘oh no, we’re going to be beaten to the market by these guys,” Tamblyn says.

The pair responded quickly by launching a Pozible campaign to help them gain a first mover advantage, but the crowdfunding route “failed miserably”.

But there was a silver lining, with the US competitor reaching out to the Adelaide inventors.

“They sent us an email saying, ‘you guys have solved so many of the tech issues that we’ve been dealing with. We’ve got these fantastic business structures, let’s join forces’. So we did,” Tamblyn says.

Since the partnership, Voxiebox has enjoyed significant growth and the team is currently securing a sizable investment deal that’s set to be announced in the coming weeks.

The Adelaide founders have lofty goals too.

“We want Voxiebox in every living room,” Tamblyn says.

The startup is on the ground in New York and San Francisco, and has brought on prominent programmer Ken Silverman as chief scientist.

Voxiebox has also been showcased at some of the world’s biggest tech conferences.

“TechCrunch Disrupt was crazy, it was awesome,” Tamblyn says.

“It was pretty exciting to validate the enthusiasm and energy that people are showing for our tech.”

The company still has strong roots in Adelaide, and Smith says this proves that inventive entrepreneurs can lead the way with new technologies from at home in Australia.

Voxiebox is now testing the technology with a group of early adopters with a focus on product development and product-market fit.

The startup recently sent out a form to these users asking them how they wanted to use the hologram technology.

“Since then we’ve had an overwhelming number of companies and individuals write to us with a huge variety of different use cases,” Smith says.

Voxiebox will soon release development kits enabling these users to experiment and validate the various uses.

“I’m really excited about building the grassroots community of developers and seeing what people want to do with the tech that we’ve made,” Tamblyn says.

The next challenge for Voxiebox will be making the product as exciting for a mainstream audience as it is for the tech savvy, he says.

“The best way to get that mainstream audience on board is to really have that grassroots community of early adopters and innovators really become passionate about the technology and what it enables them to do,” Tamblyn says.