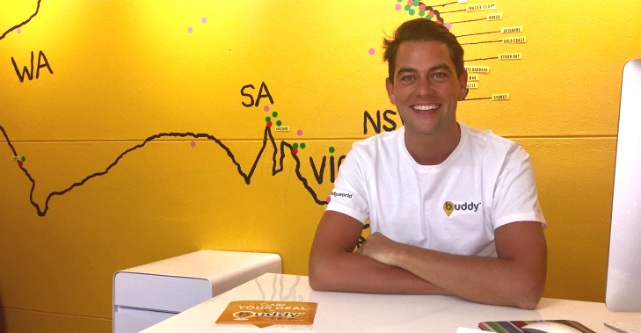 After running a restaurant in Noosa for five years, 28-year-old Danny Simmonds bought himself a camper van and set off on a travel adventure.

But this was no ordinary holiday.

“It’s a TripAdvisor mixed up with a Groupon,” Simmonds tells StartupSmart.

When the Buddy Australia app hits the market, customers will be able to find exclusive deals for local cafes, restaurants and takeaway shops, book a table, and pay for meals inside its app.

Businesses will also be able to showcase what they’re like inside through 360-degree videos, virtual tours and photos, in addition to menu and price lists, digital coupons and social media links.

With $320,000 in early stage funding collected from family and friends, Simmonds’ restaurant Global Bar Café and the remortgaging his home, the entrepreneur has employed a small team and office space, set up a new website and commenced app development.

It’s a modern solution to the “medieval” marketing options available to the hospitality sector today, says Simmonds, who met with over 300 businesses on his market research trip.

From expensive magazine ads where you can’t track the return to basic storefront signs, Simmonds says small players in the hospitality sector who don’t get thousands of people walking by everyday really struggle to get seen.

He experienced this first hand with his own restaurant, where posting deals on social media sites like Facebook offering free wine with meals failed to bring a single customer through the door.

“But every single customer that came in through my door didn’t even know about it.”

Before leaping in to build a solution, Simmonds ventured into the market to test its appeal.

“My experience of learning is you have to see it to believe it,” he says.

“To make sure I was going to put the amount of money I was into [Buddy Australia], I wanted to guarantee this is going to happen.

“I wanted to go out there and learn how people are responding to my pitch.”

The trip left Simmonds with a “book the size of a bible” filled with comments, feedback and ideas but most importantly, evidence the problem exists and that his solution has demand.

Around 89% of businesses he visited were keen to sign up to the app, he says.

Launching a tech startup without knowing how to code

With no experience in coding or software development, Simmonds sought help from Sunshine Coast’s innovation centre.

“I have got no tech background whatsoever,” he says.

“I met with mentors for expert advice and [they] introduced me to programmers, which is where I found my team and started putting the company together.”

The team will launch the app after 1000 businesses list on Buddy Australia.

“Our aim by 2020 is to have over 1 million listings across Australia, New Zealand and the UK,” he says.

So the adventure’s only beginning for Simmonds.

“[Building a startup] is like Melbourne weather, it’s all four seasons in one day,” he says.

“You get your bad days with no positive feedback, you go to meetings [and] get no news, no interest, then the next day you get people wanting to throw $200,000 at you.

“To be honest, it has been very rewarding.”