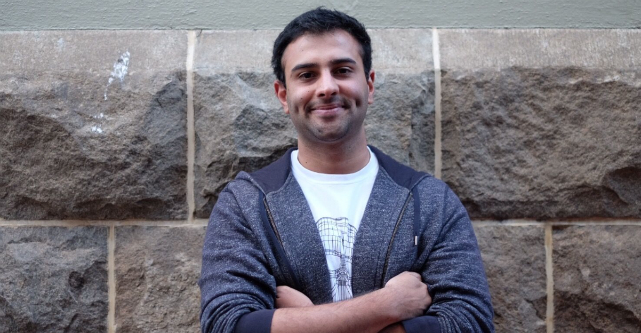 Melbourne entrepreneur Sean Andrews has always been obsessed with the Star Wars franchise, even before signing a deal with Disney and Lucasfilm in 2015.

“I’m a bit of a Star Wars nut,” he tells StartupSmart.

This inspired Andrews to create his own Death Star.

At the time, he was running a distribution business while building Plox, a startup specialising in portable power devices.

He was also studying entrepreneurship and business law at university.

In early 2015, Andrews began developing a Death Star mobile speaker and called up a friend with a link into Disney Australia so he could show it to them.

“We walked into the Disney office, put it in front of them and said we can do this,” he says.

It took “several iterations” going back and forth with Disney and Lucasfilm before Plox got the green light on developing an official, gravity-defying Death Star speaker.

“When I look at [the first version] today, I kind of have a bit of a laugh,” he says.

Apart from presenting a good product, Andrews says Plox was able to demonstrate a proven track record in manufacturing and sales.

“We had already done a couple of products, there was a lot of reliance on our prior experience with distribution, retail strategy and execution,” he says.

“Disney liked us because of our execution.”

Plox had also won a CES Innovation award for portable power that year.

Being able to communicate a clear plan on how the startup would bring the product to life, while establishing retailers and distributors that not only represent Plox but the Star Wars and Disney brands well, enabled Andrews and his co-founder to seal the major deal.

“We were able to say: ‘Here’s our retail strategy, here’s our merchandising, here’s how we’re going to train staff’,” he says.

“How we are going to promote this product and the brand, and make it come to life.”

Nearly a year later and Plox has now released the Death Star speakers to market.

“We supply everyone from Harvey Norman, JB Hi-Fi, Telstra, Big W [to] Catch of the Day,” he says.

“Demand’s been a lot higher than we thought.”

The Star Wars fan will now use the force of portable power to lead Plox through its its next mission.

“We’re moving quite aggressively into connected devices,” he says.

“We’re going to focus on portable power and connected devices [for the] home, lifestyle, power and licenses.”

Coming up with innovative ideas is an ongoing battle and a startup Jedi should always keep their eyes open for new opportunities, says the entrepreneur.